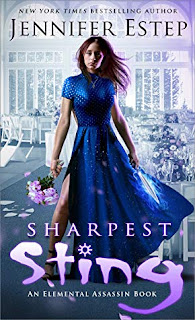 Sharpest Sting is book 18 in the Elemental Assassin series. I adore this series so knew I had to give it a read as soon as I could. Full of plotting and fighting you won't have a dull time with this series. We're gearing up for a big boss fight soon and I'm hoping Gin and the gang are ready.

Gin Blanco, aka the Spider is still finding trouble in Ashland even with her reputation as an assassin. Over the past few books we've slowly been unraveling details about a group called the Circle. With the revelation in the previous novel of who is actually in charge of the group I was hoping to get more details this time around and was not disappointed. We wind up learning a lot more about Gin's family and younger years that were missing in the series previously. There were a few secrets I didn't expect but it really made for an interesting plot that kept me on my toes.

With Gin killing some of the Circle's guards early in the book I was intrigued when she hires her own security detail since she hasn't done that before. So we have a few new faces in this book but the gang's all here. The main plot line in this books is that Gin is tasked with finding a ledger for the Circle or people she cares for will die. Juggling that and bridesmaid duties since a friend is getting married is going to keep her very busy. While we don't see an epic boss fight at the end of this installment, we're clearly gearing up for one in the coming books.

Sharpest Sting is another great addition to an Urban Fantasy series you won't want to put down. I really wound up enjoying this book and can't wait to see what trouble Gin gets into in the next book. I have noticed that since the series switched over to being self published the editing is still great but there are a few repetitive things/words that occur. It didn't really detract from my reading experience but it happens enough that I thought I should mention it. This series is still going strong and I'd recommend it to anyone that loves magic mixed in with tons of action.