Review: Ship of Smoke and Steel by Django Wexler 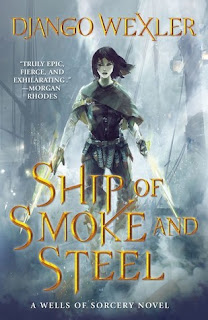 Ship of Smoke and Steel is book 1 in The Wells of Sorcery series. I've been on a YA kick lately and this was a perfect match for my mood. This is a really unique read that already has me itching for the next installment. It pretty heavily revolves around a magic, and has you rooting for the lead the whole way.

We start off meeting our leading lady Isoka, an eighteen year old that works as a ward boss in Kahnzoka. She hunts down people that owe her boss money and make examples out of them. She's not afraid of using her powers or killing who she needs to since the dead cannot talk. That is until one day she's captured and taken to a ghost ship, if she manages to take control of it and bring it back then her sister will not be harmed. The catch is that all the occupants are like her, they're able to tap into one or more of the Wells and harness some sort of magical power. There's also the small fact that once aboard the ship, no one has been able to leave. Isoka winds up being assigned to a group/pack and quickly having to learn the ropes. There's so many dangerous people and beings, but I had high hopes for Isoka since she's familiar with this kind of power structure from her working for a ward boss days.

Ship of Smoke and Steel is a must read if you like Young Adult Fantasy enmeshed in magic. While Isoka isn't exactly on the good side she's not on the bad side, she does what needs to be done and will have you cheering her on along her journey. The ghost ship fascinated me and I'm eager to grab book 2 when it's released. It looks like this is a 3 book series with book 2 being marked for Winter 2019. I'd recommend this one if you're looking for a YA Fantasy novel with lots of fighting and exploring.