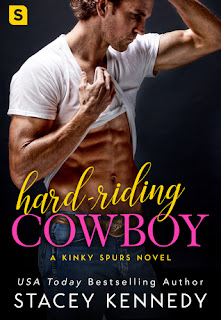 Hard-Riding Cowboy - Stacey Kennedy
Megan Harrison is the owner of Kinky Spurs. She’s mortgaged up to her eyeballs and works long days and nights, but she’s living life on her terms, not on her wealthy father’s. She’s done being in the cattle rancher’s shadow. She’s got it all figured out, except for the part that involves Nash Blackshaw. He’s a sexy as hell cowboy whose smile can easily charm her out of her tight jeans. The only problem is—their fathers were business rivals, and Megan and Nash have been taught to hate each other since birth.

Nash Blackshaw, a retired professional bull rider, has responsibilities on top of responsibilities. With his PBR career over due to back injury, and his focus narrowed on heading up the Blackshaw Cattle Company’s Guest Ranch, he shouldn’t have time to think about all the ways he wants Megan. But it’s all he thinks of around the sassy and sweet woman. She might be forbidden to him, but Nash wants to take her for a hard, kinky ride.

But small towns have a way of spreading gossip like wildfire, and not everyone is happy about their relationship. Especially when Megan drops a bombshell on Nash after one heated night between them. As much as Megan and Nash want to forget the old feud between their fathers and lose each other in explosive passion, they can’t escape reality. They are meant to be enemies, and Nash’s sizzling, dominant touch might not be enough to keep them together. 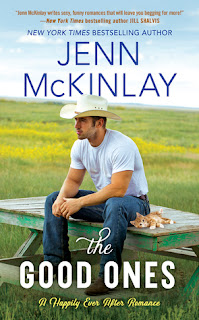 The Good Ones - Jenn McKinlay
A romance bookstore owner finds her own happily ever after with a single dad in a new romance series from the New York Times bestselling author of Every Dog Has His Day.

Ryder Copeland is an accomplished architect and one heck of a father...not to mention tall and sexy. He's everything a hero should be, and Lord knows, Maisy Kelly has read enough of her great-aunt Eloise's romance novels to recognize one when she sees one. But like all fairy tales, Maisy can't help but wonder if this Prince Charming is too good to be true...

Ryder is drawn to the shy, curly haired professor who hires him to convert the Victorian house she's inherited from her aunt into a romance bookstore. Attracted to a woman for the first time since his divorce, Ryder finds himself wishing for a future with Maisy that he knows is impossible. Ryder has never wavered from his plan to leave the small town of Fairdale, North Carolina, so he can give his daughter the life she deserves. But suddenly he's not so sure. And the closer he gets to Maisy, the harder it's going to be to walk away... 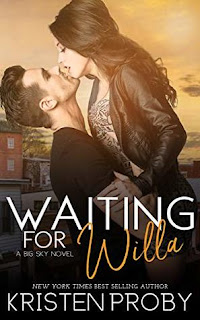 Waiting for Willa - Kristen Proby
Max Hull left Cunningham Falls a long time ago. Thanks to his killer instincts and business smarts, he’s come back to town richer than anyone’s wildest imagination. Now he’s closer to his family, living in his dream home, and at the top of his career—it sure looks like he has it all.

Willa Monroe and Max were childhood sweethearts. She daydreamed about their wedding day and named their children, but Max’s dreams were bigger than her. After high school, he left her behind without another word. Now, Willa is a single mother and a successful business owner, and the heartbreak of losing Max was a very long time ago.

But when he walks into her shop and back into her life, suddenly it feels like no time has passed at all. He’s as handsome as ever, and more charming than she remembered. Once he makes friends with her son and turns his attention on her, how long will she be able to resist him?

And does she really want to? Sometimes you do get a second chance at first love.
Posted by LilyElement at 12:00 AM