WoW [343] - Highlander Ever After by Paula Quinn 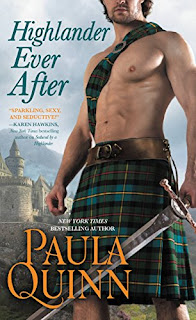 They tried to resist a marriage of convenience...
As the clan chief's son, Adam MacGregor is duty-bound to marry a royal heir. Yet when he meets his bride---a beautiful but haughty young lass who thinks he is nothing more than a common savage---he realizes she's more than he bargained for. But the more Adam gets to know his new wife, the more intent he is on proving her wrong about him.

But can they resist each other?
Sina de Arenberg wants nothing to do with the unsavory MacGregors, especially the fierce Highlander she now calls husband. But the more time she spends with the man she married, the more she sees his honor and courage. Just when she thinks there might be a future for her and Adam, Sina is called back to court. England isn't the place she remembers, though, and soon she'll be forced to choose between the life she once knew, and the Highlander who has captured her heart.

Why I am waiting:
Mmmm Highlanders, need I say more?