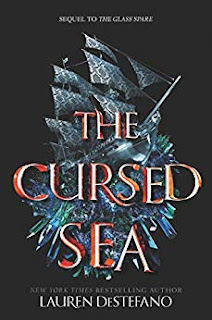 The Cursed Sea - Lauren DeStefano
The second in an exciting fantasy duology about a princess cursed to turn any living thing she touches into gemstone from Lauren DeStefano, the bestselling author of the Chemical Garden series. Perfect for fans of Shannon Hale and Renée Ahdieh.

Wil, the exiled princess of northern Arrod, must do what she never thought possible: return home to discover the origins of her own curse.

But home is very different from how she left it—Wil’s unpredictable elder brother Baren is now king, leading a war against the Southern Isles. And with time running out, Wil must navigate the dangerous secrets within her family to find the truth.

Nothing goes as planned, and suddenly Wil and her allies are fighting for their lives as the Southern king is out to ensure neither of his children will survive to take the throne. Traveling across cursed seas and treacherous kingdoms, Wil and Loom must make peace with their pasts if they hope to secure the future of their world.

But when their plans lead them right back to evil marveler Pahn, and to Baren—who is more dangerous than ever—can Wil and her friends outsmart their enemies, this time for good? 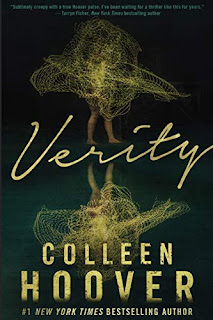 Verity - Colleen Hoover
Lowen Ashleigh is a struggling writer on the brink of financial ruin when she accepts the job offer of a lifetime. Jeremy Crawford, husband of bestselling author Verity Crawford, has hired Lowen to complete the remaining books in a successful series his injured wife is unable to finish.

Lowen arrives at the Crawford home, ready to sort through years of Verity's notes and outlines, hoping to find enough material to get her started. What Lowen doesn't expect to uncover in the chaotic office is an unfinished autobiography Verity likely didn't intended for anyone to read. Page after page of bone-chilling admissions, including Verity's recollection of the night their family was forever altered.

Lowen decides to keep the manuscript hidden from Jeremy, knowing its contents would devastate the already grieving father. But as Lowen's feelings for Jeremy begin to intensify, she recognizes all the ways she could benefit if he were to read his wife's words. After all, no matter how devoted Jeremy is to his injured wife, a truth this horrifying would make it impossible for him to continue to love her. 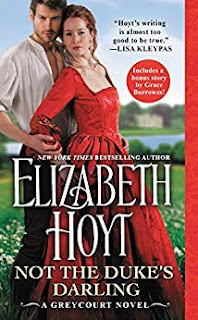 Not the Duke’s Darling - Elizabeth Hoyt
Freya de Moray is many things: a member of the secret order of Wise Women, the daughter of disgraced nobility, and a chaperone living under an assumed name. What she is not is forgiving. So when the Duke of Harlowe, the man who destroyed her brother and led to the downfall of her family, appears at the country house party she's attending, she does what any Wise Woman would do: she starts planning her revenge.

Christopher Renshaw, the Duke of Harlowe, is being blackmailed. Intent on keeping his secrets safe, he agrees to attend a house party where he will put an end to this coercion once and for all. Until he recognizes Freya, masquerading among the party revelers, and realizes his troubles have just begun. Freya knows all about his sins-sins he'd much rather forget. But she's also fiery, bold, and sensuous-a temptation he can't resist. When it becomes clear Freya is in grave danger, he'll risk everything to keep her safe. But first, he will have to earn Freya's trust...by whatever means necessary.