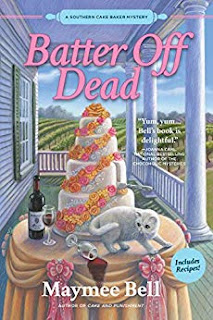 Batter Off Dead - Maymee Bell
Sophia Cummings may be unlucky in love, but she knows that the way to a man's heart is through his sweet tooth. This evening, she plans to use that knowledge—and her skills as a New York City-trained pastry chef—to open the hearts and wallets of Rumford, Kentucky’s richest men. Sophia, proprietress of For Goodness Cakes, has been commissioned to cater the Heart of the Town Library charity fundraiser at Grape Valley Winery. She’s spent all her dough to make this a successful event, raise her profile, and win more plum catering jobs.

At first, the going is as smooth as an elegant chocolate ganache. After nibbling Sophia’s tasty treats, Ray Peel, the winery’s landlord, announces he will pay off Rumford’s library loan. But the evening soon turns decidedly frosty when Ray is murdered—before he can make good on his promise, and before he can pay Sophia for her catering services.

For Goodness Cakes will collapse if Sophia can’t collect what she’s owed. So Sophia once again puts on her sleuthing apron to figure out who iced Ray. A glass of your favorite red or white is the perfect accompaniment to Maymee Bell’s scrumptious Batter Off Dead―with authentic Southern recipes! 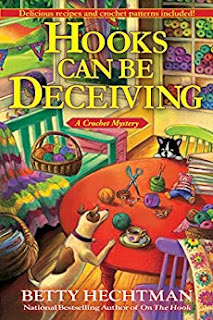 Hooks Can Be Deceiving - Betty Hechtman
The Tarzana Hookers crochet club is ready for its close-up! But Molly Pink may be getting too close to a case that will land her on the cutting-room floor.

Molly Pink’s excitement level is off the hook: The Craftee Channel’s new cable talk show “Creating with Crochet” has scheduled an upcoming taping at the bookstore. While she’s there, TV host Rory Graham is to work with the Tarzana Hookers on a Make and Take bracelet project to draw bookstore customers to the yarn section. It’s a win-win…or so it “seams.”

The situation gets a bit knotted when channel producer Michael Kostner confides to Molly his concern that Rory may have oversold her ability as a crocheter. When the producer’s worst fears are realized, it’s up to Molly to make sure Rory comes through.

Guiding Rory through crocheting-for-beginners will have to wait, though, as Molly suddenly has to untangle the mysterious death of a new Tarzana Hookers member. Marianne Freeman and her live-in companion, Connie Richards, haven’t exactly been gabby since they joined the Hookers, but Connie’s voice is silenced permanently when she is electrocuted while walking on a wet lawn—electrified by an old radio plugged into a faulty extension cord. The fingers point at Marianne, but Molly is fast on the case to protect one of her own. Was Marianne the killer…or the intended target? Why does her younger brother want to keep her from talking to the cops? And why is this whole case starting to remind Molly Pink of an old TV movie? 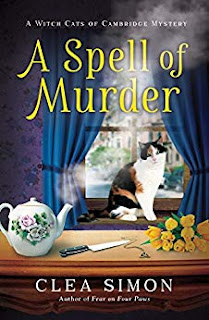 A Spell of Murder - Clea Simon
“It’s Harriet’s fault. It’s always her fault, not that she’ll ever admit it.” So begins A Spell of Murder: A Witch Cats of Cambridge mystery, the first in a new cozy series that mixes feline fiction with a touch of the paranormal, and a little romance as well.

Becca, newly single and newly unemployed, wants to believe she has psychic powers. With nothing but time – and a desire for empowerment – she’s studying to become a witch. What she doesn’t know is that her three cats – Harriet, Laurel, and Clara – are the ones with the real power. And when Harriet – “a cream-colored longhair with more fur than commonsense” – conjures a pillow for her own comfort, Becca believes her spells are finally working. Could that be why Trent, the coven’s devilishly handsome leader, has been showing her special attention? Or why Suzanne, a longtime coven member, draws her aside to share a secret – a confidence that may lead to murder?
Posted by LilyElement at 12:00 AM