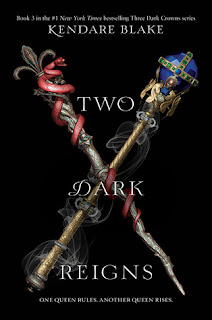 Two Dark Reigns is book 3 in the Three Dark Crowns series. I had a great time with the first two books but this one was a bit different. I might be in a reading funk or I'm not sure what is going on. I wanted to DNF this book but decided to wait to decide until around the half way point. I stuck it out and I'm glad I did because the last half got better for me.

Spoilers from the previous two books will be said, so if you haven't read them or plan to just know I enjoyed them and stop reading here. The series started with the triplet Queens having to battle it out where only one remains and gets crowned. The first book had all the back story and day to day lives of each of the girls, the second book had the actual battling it out and what not. This one was a slower paced novel that showed Katharine, the poisoner queen being crowned the Queen of Finnbirn and the other two sisters Mirabella and Arsinoe back on the mainland hiding out. Katharine is struggling big time with being the Queen, no one really believes in her, she's done some things to get crowned that are coming back to bite her and the mist that protects the island is starting to turn on them. Mirabella and Arsinoe on the other hand are in hiding and neither is happy, their powers are weakened if not gone and Arsinoe is starting to see one of the past Queens and have dreams that show the past from that time period. It's rather odd, and all signs are pointing that they need to go back to the island. We also have a twist of Jules, Arsinoe's friend being talked into trying her hand at taking over being Queen.

Two Dark Reigns felt like we're setting up for the big finale. There was a lot going on but the book just dragged a bit too much for my taste. It sounds like book 4 will be the last book since it says "Kendare Blake has been contracted to extend the series from two books to four." on the GoodReads page. I will probably grab that one from the library whenever it is released just to see how the series ends. If it's like the second half of this book I should enjoy it. If you're a fan of darker YA Fantasy novels you might enjoy this series.