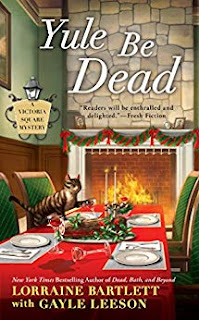 Yule Be Dead - Lorraine Bartlett
A Christmas crime shocks the merchants of a quaint shopping district in this latest installment of The New York Times bestselling Victoria Square series.

It's Christmastime, but not everyone is jolly--especially not Vonne Barnett. Her dead body has been found in Victoria Square. Katie Bonner, the manager of Artisan's Alley, happens to be at the tea shop Vonne's mother, Francine, owns when the news is delivered.

Vonne left a trail of men behind her so the suspects are many--but the clues are few. A broken teacup leads Katie to one of the suspects, but before she can investigate, she's attacked. Katie may be closing in on a murderer, but time is ticking because the murderer is definitely closing in on her. 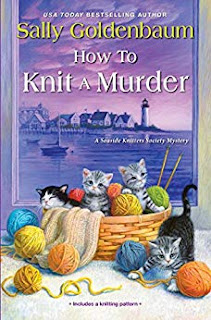 How to Knit a Murder - Sally Goldenbaum
A mysterious woman arrives in picturesque Sea Harbor, Massachusetts, and the Seaside Knitters welcome her into their cozy world of intricate patterns and colorful skeins. Unfortunately, nothing frays a warm introduction like cold-blooded murder . . .

With her shy manner and baggy jeans, Rose Chopra becomes an unlikely superhero the night she stumbles into Izzy Perry’s shop and inadvertently saves a shipment of yarn from water damage. When the Seaside Knitters help the enigmatic handywoman settle into town and find work at a popular real estate company, Rose proves she can fix just about anything—until a potential homebuyer is killed and she becomes entangled in murder . . .

The moment controversial entrepreneur Spencer Paxton is found dead in a pricey ocean-side house, accusations fly at the last person on the property—Rose. But the Seaside Knitters have their doubts. After all, Spencer’s political aspirations as well as his company’s plans to pave over Sea Harbor’s historic art district with luxury apartments earned him some very real enemies . . .

Now, Izzy, Birdie, Nell, and Cass must swap knitting for sleuthing as they struggle to move the needle on a twisted homicide case causing turmoil across town. As tensions build in the sleepy New England community and Rose’s secret past unravels, the ladies face an unsettling realization—true victims aren’t always the ones buried six feet under . . . 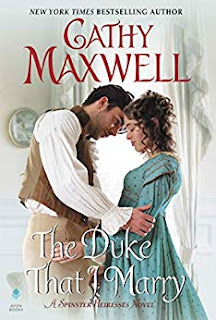 The Duke That I Marry - Cathy Maxwell
Once upon a time there were three young ladies who, despite their fortunes, had been on the marriage mart a bit too long. They were known as “the Spinster Heiresses” . . .

Is it wrong for a woman to want more?

Not if she is a Spinster Heiress. They do not settle. Any young miss would be very lucky to find herself promised to a man like the Duke of Camberly. However, Miss Willa Reverly has watched her friends marry for love. Camberly may be the prize of the season, but she will not be “sold” to any man. She wants his devotion or she wants nothing at all.

When is a Marriage of Convenience inconvenient?

Newly named to the ducal title, Matthew Addison is determined to discover the secrets behind Mayfield, the bankrupt estate he has inherited. He doesn’t have time to coddle a headstrong heiress who is determined to ditch him over something as silly as “love.” Little does he know that his questions will place her in jeopardy. Now he must do what he must to save them both.

Could it be that in running from danger they might be racing headlong into a truly unexpected fate: falling in love? 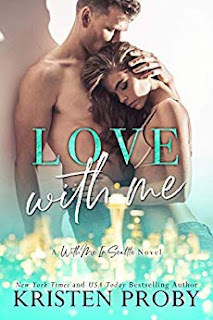 Love with Me - Kristen Proby
Best friends from college. Plus-ones since med school. A chance for something new...

Jace Crawford heals hearts for a living. More than that, medicine is his life. To become the leading cardiothoracic surgeon on the west coast, he’s made sacrifices. No social life. He barely has time to sleep. Love? Forget about it. But when everything goes horribly wrong on his table, and he unexpectedly loses a patient, Jace is suspended from work.

When a man has nothing but his job, what does he do when that’s gone?

Joy Thompson collects unwanted strays. A dog with one eye, a three-legged cat, a bird that swears like a sailor? All part and parcel of her veterinary business. It helps pass the time.
Until Jace calls out of the blue to ask her out on a real date. Spending extra time with him is dangerous. Her feelings for her best friend have always been stronger than simple companionship. If she gets attached, what happens when he goes back to work and leaves her behind?
But as the weeks progress, falling for each other is inevitable. This time, Jace’s heart is the one that will need fixing before both of them end up broken.
Posted by LilyElement at 12:00 AM