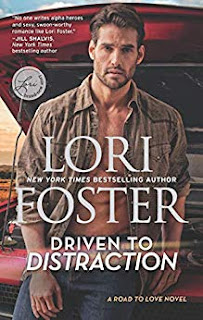 Driven to Distraction - Lori Foster
When desire gets this hot, you’d better buckle up…

Mary Daniels doesn’t let anything get in the way of her job acquiring rare artifacts for her wealthy boss. But this particular obstacle—huge, hard-muscled, unashamedly masculine—is impossible to ignore. Stuck in a cramped car with Brodie Crews for hours en route to their new assignment, Mary feels her carefully crafted persona—and her trademark self-control—is slipping, and she won’t allow it.

Brodie can’t imagine what secret in Mary’s past has left her so buttoned-up, though he’d dearly love to find out. Maybe then she’d trust him enough to explore their explosive chemistry. But he needs this job, so he’ll play by her rules and bide his time…until an enemy determined to outwit them strikes and he needs to get close—in every way—to protect her. Otherwise they could lose much more than a precious collectible. They could lose it all. 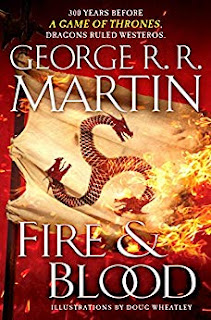 Fire & Blood - George R. R. Martin
The thrilling history of the Targaryens comes to life in this masterly work by the author of A Song of Ice and Fire, the inspiration for HBO’s Game of Thrones.

Centuries before the events of A Game of Thrones, House Targaryen—the only family of dragonlords to survive the Doom of Valyria—took up residence on Dragonstone. Fire & Blood begins their tale with the legendary Aegon the Conqueror, creator of the Iron Throne, and goes on to recount the generations of Targaryens who fought to hold that iconic seat, all the way up to the civil war that nearly tore their dynasty apart.

What really happened during the Dance of the Dragons? Why was it so deadly to visit Valyria after the Doom? What were Maegor the Cruel’s worst crimes? What was it like in Westeros when dragons ruled the skies? These are but a few of the questions answered in this essential chronicle, as related by a learned maester of the Citadel and featuring more than eighty all-new black-and-white illustrations by artist Doug Wheatley. Readers have glimpsed small parts of this narrative in such volumes as The World of Ice & Fire, but now, for the first time, the full tapestry of Targaryen history is revealed.

With all the scope and grandeur of Gibbon’s The History of the Decline and Fall of the Roman Empire, Fire & Blood is the the first volume of the definitive two-part history of the Targaryens, giving readers a whole new appreciation for the dynamic, often bloody, and always fascinating history of Westeros. 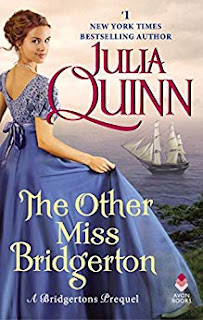 The Other Miss Bridgerton - Julia Quinn
She was in the wrong place...

Fiercely independent and adventurous, Poppy Bridgerton will only wed a suitor whose keen intellect and interests match her own. Sadly, none of the fools from her London season qualify. While visiting a friend on the Dorset coast, Poppy is pleasantly surprised to discover a smugglers’ hideaway tucked inside a cave. But her delight turns to dismay when two pirates kidnap her and take her aboard a ship, leaving her bound and gagged on the captain’s bed…

He found her at the wrong time...

Known to society as a rascal and reckless privateer, Captain Andrew James Rokesby actually transports essential goods and documents for the British government. Setting sail on a time-sensitive voyage to Portugal, he’s stunned to find a woman waiting for him in his cabin. Surely, his imagination is getting the better of him. But no, she is very real—and his duty to the Crown means he's stuck with her.

Can two wrongs make the most perfect right?

When Andrew learns that she is a Bridgerton, he knows he will likely have to wed her to avert a scandal—though Poppy has no idea that he is the son of an earl and neighbor to her aristocratic cousins in Kent. On the high seas, their war of words soon gives way to an intoxicating passion. But when Andrew’s secret is revealed, will his declaration of love be enough to capture her heart…?
Posted by LilyElement at 12:00 AM