Review: Venom in the Veins by Jennifer Estep 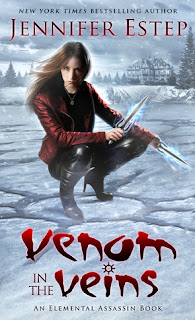 Venom in the Veins is book 17 in the Elemental Assassin series. I really have loved this series and can't believe we're at book 17 already. I did notice this installment was published by the author directly so can only assume the publisher didn't renew the contract - either way I'm glad the series is able to continue.

Gin Blanco is back and the Spider gets to come out and play in this installment. We dive pretty much right into the action when Gin stops someone going after Stuart Mosley (Finn's boss). Now she just has to figure out who is behind the attack and why they'd want to hurt him. We also have an auction going on that has the last of Mab Monroe's belongings and any money raised will go towards charity. Someone isn't above playing games though, everything is eerily familiar to one of the first kills Gin did as the Spider. We're also creeping slowly towards more information on the Circle, and it just keeps getting more dangerous for our gang as we unravel more about the group.

Venom in the Veins shed some light on a few things I was wondering about but wound up not being my favorite in the series. I saw quite a few of the plot twists coming and noticed several phrases or similar instances repeated too many times for my taste. While this might not have been my favorite installment in the series, it's still a good addition overall so don't get me wrong. I'd recommend this series to fans of Urban Fantasy with lots of action and elemental powers mixed in.

Lauren Fortgang did a great job as always. This series is one of the first audiobooks I tried a few years back and actually was able to finish the audiobook. The plots are great and Lauren really does an amazing job at narration.