Review: The 7½ Deaths of Evelyn Hardcastle by Stuart Turton 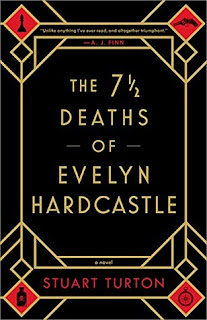 The 7½ Deaths of Evelyn Hardcastle is a standalone novel. I saw this one in a promo from the publisher and got intrigued. It wound up kind of being a mash up of the board game Clue and the movie Groundhog Day. Oh and a heads up in case you see 2 versions of this, the USA version has the "½" in the title, but everywhere else the title is The 7 Deaths of Evelyn Hardcastle so just know they're exactly the same novel, you don't need to buy both.

I really wasn't sure what to expect with this novel, and we just dive right into the confusion and action when our leading man wakes up in the woods with amnesia. He witnesses a woman being chased, then hears a gunshot. Desperate to alert the authorities he makes his way to a nearby house, only to be recognized. We learn a bit more but we're still pretty confused, things get even more confusing when he wakes up and he's a different person all together but in the same house. Eventually we get some light shed on what the heck is going on. And it's basically that there's a murder that happens at Blackheath, our main character has to solve it to get released. He has 8 days to relive the events and with that comes 8 different hosts to gleam different takes on the daily events. Everything is not as it seems though, there's someone out to hinder his progress and a mystery woman that might be on his side, but you never know who you can fully trust.

The 7½ Deaths of Evelyn Hardcastle was such a unique read. I entered it not sure what to expect and wound up really invested in finding out who the killer was. We slowly unraveled this mystery along with our hosts and there are so many things I didn't seem coming. My only complaint is it was so incredibly long and at times it dragged and I wanted it over with. I feel like it could have been cut down quite a bit and still had the big murder mystery effect. This was still a pretty good whodunit, and I liked all the twists. I'd recommend this novel if you're a fan of not knowing what the f*ck is going on and like a good mystery.