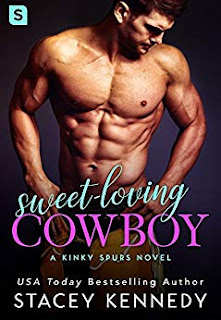 Sweet-Loving Cowboy - Stacey Kennedy
Harper McKinney finished culinary school with big dreams. Right now, she’s a bartender at Kinky Spurs. While she’s content with her life, her brother is determined that she make a name for herself, because he wants her far away from what he deems a trashy bar. But Harper refuses to go anywhere. She’s in love with her brother’s best friend, Chase Blackshaw, and that love is keeping her in River Rock.

After the death of Chase’s father, he’s the one responsible for running the construction of the Blackshaw Cattle Company’s guest ranch. Back in the day, he had dreams of opening a construction company, but lack of finances kept him working for the family’s cattle ranch. Now with the responsibility of his family’s guest ranch on his shoulders those dreams seem far away. Though he has bigger problems. His build is failing the inspections.

Now Chase has more trouble on his hands. Harper, the woman he’s forbidden to ever touch has decided to move to Las Vegas. She isn’t so little anymore, and Chase is finding her all too tempting. She’s also not shy about what she wants. Him. Naked. And giving her some sweet lovin’ in all the kinky ways he craves. But neither Chase nor Harper can anticipate the fate that awaits them if they dare give in to their desires, as Chase soon learns there is something far worse than not being able to live out his dreams. It’s being given the chance to live out his dreams but having to watch Harper lose hers. 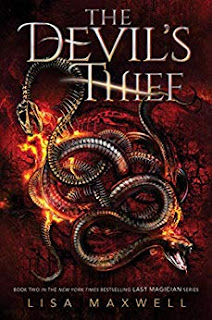 The Devil's Thief - Lisa Maxwell
Hunt the Stones.
Beware the Thief.
Avenge the Past.

Esta’s parents were murdered. Her life was stolen. And everything she knew about magic was a lie. She thought the Book of Mysteries held the key to freeing the Mageus from the Order’s grasp, but the danger within its pages was greater than she ever imagined.

Now the Book’s furious power lives inside Harte. If he can’t control it, it will rip apart the world to get its revenge, and it will use Esta to do it.

To bind the power, Esta and Harte must track down four elemental stones scattered across the continent. But the world outside the city is like nothing they expected. There are Mageus beyond the Brink not willing to live in the shadows—and the Order isn’t alone in its mission to crush them.

In St. Louis, the extravagant World’s Fair hides the first stone, but an old enemy is out for revenge and a new enemy is emerging. And back in New York, Viola and Jianyu must defeat a traitor in a city on the verge of chaos.

As past and future collide, time is running out to rewrite history—even for a time-traveling thief.
Posted by LilyElement at 12:00 AM