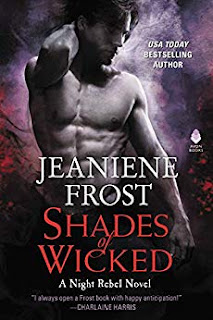 Master vampire Ian is unrepentant, shameless…and every shade of wicked. He’s made one too many enemies in his two centuries of existence, including Dagon, a demon who now lays claim to his soul. Ian’s only chance to escape Dagon is to join forces with a Law Guardian, but he's never been able to abide by the rules for long.

Veritas’ normal role is police, judge, and jury to reprobates like Ian. But she has her own ax to grind with Dagon, so if she can use Ian as bait...well, all’s fair in law and war. As they scour supernatural hotspots to perfect their trap, Veritas soon realizes Ian’s carefully cultivated, devil-may-care roguish image hides something much more powerful. And Ian discovers Veritas has shocking secrets of her own. As they’re drawn to each other with a passion as intense as their peril, either love or justice will prevail. But each will have devastating consequences. 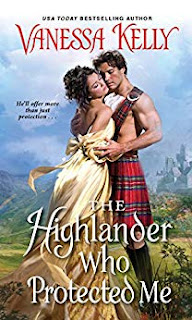 The Highlander Who Protected Me - Vanessa Kelly
Lady Ainsley Matthews, heiress and darling of the ton, was expected to make a magnificent match. Instead she’s hiding on a remote Scottish estate, terrified that her vicious former fiancé will use her pregnancy to force her into marriage. One man can help her—Royal Kendrick, son of a distinguished Highland clan. Though a mistake drove them apart long ago, Royal is the only person Ainsley trusts to protect her baby—even if that means agreeing to never see either of them again . . .

Scarred in body and soul by war, Royal suddenly has a purpose—caring for an innocent babe and thereby helping the woman he can’t stop loving. But when Ainsley ultimately returns to Scotland, determined to be a real mother to her child in spite of the risk, there’s only one solution: marriage. And only one likely outcome: surrendering to the desire that’s simmered between them for so long, no matter how dangerous it may be . . . 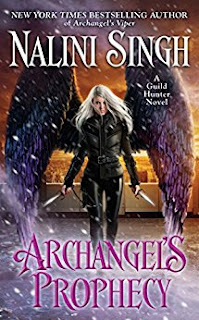 Archangel's Prophecy - Nalini Singh
Midnight and dawn, Elena’s wings are unique among angelkind—and now they are failing. The first mortal to be turned into an immortal in angelic memory, she’s regressing. Becoming more and more human. Easier to hurt. Easier to kill.

Elena and Raphael must unearth the reason for the regression before Elena falls out of the sky. Yet even as they fight a furious battle for Elena’s very survival, violent forces are gathering across the world. In China, the Archangel Favashi is showing the first signs of madness. In New York, a mysterious sinkhole filled with lava swallows a man whole. In Africa, torrential monsoon rains flood rolling deserts. And in Elena’s mind whispers a haunting voice that isn’t her own.

This time, survival may not be possible…not even for the consort of an archangel. 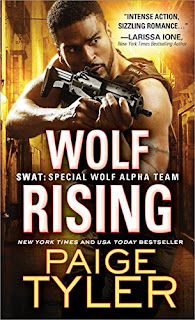 Wolf Rising - Paige Tyler
Just when he's found The One...he might lose her.

SWAT Officer Jayden Brooks doesn't believe there's a soul mate out there for him—The One. But when he saves high school teacher Selena Rosa from a hostage situation, he knows he's in big trouble. Her scent is irresistible.

Selena finds the big cop irresistible, too. In fact, the buttoned-up teacher gets a little carried away—during a steamy make-out session, she bites him. Turns out, the traumatizing events at the school triggered her werewolf gene. Fangs and claws are appearing and her aggression is out of control. The change is happening, and Selena doesn't understand.

It's going to take everything Brooks has to pull her back from the edge...and ultimately win her heart.
Posted by LilyElement at 12:00 AM