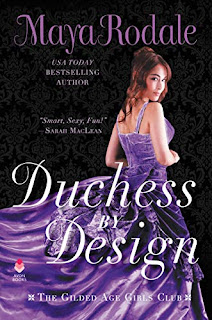 Duchess by Design - Maya Rodale
In Gilded Age Manhattan, anything can happen...

Seeking a wealthy American bride who can save his family’s estate, Brandon Fiennes, the duke of Kingston, is a rogue determined to do the right thing. But his search for an heiress goes deliciously awry when an enchanting seamstress tumbles into his arms instead.

...and true love is always in fashion

Miss Adeline Black aspires to be a fashionable dressmaker—not a duchess—and not even an impossibly seductive duke will distract her. But Kingston makes an offer she can’t refuse: join him at society events to display her gowns and advise him on which heiresses are duchess material. It’s the perfect plan—as long as they resist temptation, avoid a scandal, and above all do not lose their hearts. 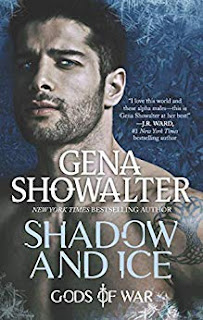 Shadow and Ice - Gena Showalter
Knox of Iviland, the most ruthless warrior in All War history, has spent his life fighting others to the death, winning new realms for his king. Now the stakes are higher than ever. If he prevails in the battle for Earth, his slave bands will be removed. Victory is his sole focus…until he meets her.

On an arctic getaway with her foster sister, street tough but vulnerable Vale London is shocked to stumble upon a cave filled with ancient gods waging epic combat. When she is inadvertently drawn into their war, she is forced to team up with an unlikely ally—the sexy god who makes her burn with desire.

Though Vale is his enemy, Knox is consumed with lust and a fierce need to protect her. But only one combatant can triumph, and he will have to choose: live for freedom, or die for love.
Posted by LilyElement at 12:00 AM