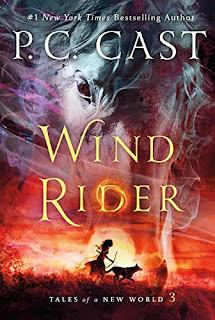 Wind Rider - P. C. Cast
Mari, Nik, and their newly formed Pack are being hunted. Thaddeus and the God of Death will stop at nothing until they are obliterated from the earth. But Mari and Nik have one goal: to reach the plains of the Wind Riders, in order to band together to stop Thaddeus from destroying all that Mari and Nik hold dear.

But will the mysterious Wind Riders accept the Pack, or will Mari and Nik and their people be rejected by the mighty Riders and be forced to flee for their lives? And what happens when a rogue Lead Stallion gets too close to the Pack, rejecting all Wind Riders and turning to a stranger for companionship instead?

In the next installment of the Tales of a New World series love and goodness are put to the ultimate test. Will the Wind Riders and the Pack be strong enough to withstand the God of Death? Will the Great Goddess of Life awaken to join the battle, and if so, will it be as Death's consort, or will the Goddess stand with Mari and her people against the great love of her eternal life? 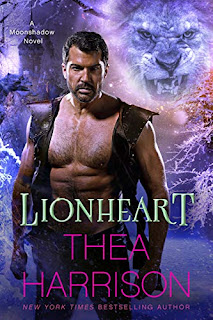 Lionheart - Thea Harrison
King Oberon reigned over his Dark Court in Lyonesse for centuries, until an assassination attempt laid him low. Now he lies unconscious in his snow-bound palace, while his Power battles the enchantment that threatens to end his life.

A skilled trauma surgeon and magic-user, Dr. Kathryn Shaw reigns at the top of her profession in New York. Then comes a challenge she can’t resist—she is asked to cure the uncureable. Just getting close enough to try healing Oberon is a dangerous proposition. When she does reach him, he awakens too soon.

Roused from darkness by Kathryn’s presence, Oberon confronts the beautiful stranger who claims she wants to save his life. But the enchantment has frozen his emotions. How can he learn to trust her when he can’t feel anything?

Oberon’s desire is icy, devoid of all tenderness. Not only must Kathryn match wits with him, she must also fight her reaction to his touch, because there is so much more at stake than her own endangered heart.

For the Dark Court faces its most deadly peril yet. Its ancient enemy Isabeau, Queen of the Light Court, is obsessed with its annihilation, and Oberon must be brought to remember his loyalty and affection for his people.

Because if he won’t fight for them, Lyonesse itself may very well be destroyed… 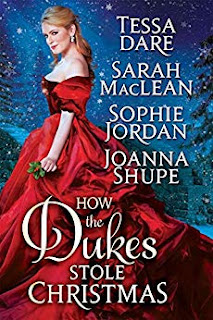 How the Dukes Stole Christmas
Christmas magic is in the air... From the ballrooms of London, to abandoned Scottish castles, to the snowy streets of Gilded Age New York, four bestselling authors whip up some unforgettable romance...with a little help from some enchanted shortbread.

"Meet Me in Mayfair" by Tessa Dare
Louisa Ward needs a Christmas miracle. Unless she catches a wealthy husband at the ball tonight, the horrid, heartless Duke of Thorndale will evict her family from their beloved Mayfair home. But when her friend begs to switch dance cards, Louisa finds herself waltzing with the enemy: the horrid, heartless--and unexpectedly handsome--Thorndale himself. Now the duke's holding her future in his hands...and he's not letting go.

"The Duke of Christmas Present" by Sarah MacLean
Rich and ruthless, Eben, Duke of Allryd, has no time for holidays. Holidays are for whimsy and charm--the only two things his money cannot buy. Lady Jacqueline Mosby is full of both, even now, twelve years after she left to see the world. When Jacqueline returns for a single Christmas, Eben can't resist the woman he never stopped loving...or the future that had once been in reach. It will take a miracle to convince her to stay...but if ever there were a time for miracles, it's Christmas...

"Heiress Alone" by Sophie Jordan
When Annis Bannister's family leaves her behind in the rush to escape an impending snowstorm, she finds herself stranded in the Highlands, left to fend off brigands terrorizing the countryside, robbing homes locked up for winter. Her only hope falls on her neighbor, a surly hermit duke who unravels her with a look, then a kiss ... until she fears the danger to her heart outweighs the danger of brigands and snowstorms.

"Christmas in Central Park" by Joanna Shupe
Women all over America devour Mrs. Walker's weekly column for recipes and advice. No one knows Rose, the column's author, can't even boil water. When the paper's owner, Duke Havemeyer, insists she host a Christmas party, Rose must scramble to find a husband, an empty mansion, and a cook. But Duke is not a man easily fooled and she fears her perfect plan is failing--especially when Duke's attentions make her feel anything but professional. To save her career will she give up her chance at love?