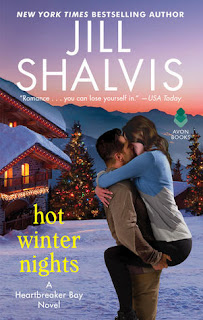 Hot Winter Nights is book 6 in the Heartbreaker Bay series. I love this series, it revolves around a group of friends and we rotate lead characters each installment to get a different love story. There have been a few standout books for me in this series, and this is one of them. I'm also glad we're back seeing the hunks at Hunt Investigations this time around, I'm hoping for some more stories with them as a lead since I adore the guys there!

We start the book with Lucas Knight waking up after a night out at the bar to find a woman in his bed and he doesn't remember the details. He sneaks out of his place and heads into work so they don't have the awkward morning after chat. It doesn't take long before he realizes the woman in his bed is none other than his work partner's little sister, Molly Malone and the office manager at Hunt Investigations. She gives him a hard time and makes him think they fooled around but comes clean after a few days. She's way off limits if he wants to stay alive, but the attraction is there and they wind up spending more and more time together as Molly takes on a case of a bad Santa not paying his elves what they should be making. She's determined to become an investigator and Lucas wants to make sure she doesn't get hurt so he's there as backup if she needs it. There is something more to the bad Santa case that neither sees coming, and it winds up being a dangerous investigation.

Hot Winter Nights is a delight to read. I loved Molly's character and don't get me started on the sexy Lucas *fans self* I felt like our duo were a great fit for one another. They both have baggage from things that happened in their past and because of it they could understand each other well. Lucas had that protective alpha male vibe and Molly knew when to push so she could handle things on her own. The Christmas element was there and so was family on both sides which was a nice touch. They had such different environments growing up but suit each other perfectly. If you're a fan of Contemporary Romance with some suspense and some naughty romance you'll love this book.