Review: For the Duke's Eyes Only by Lenora Bell 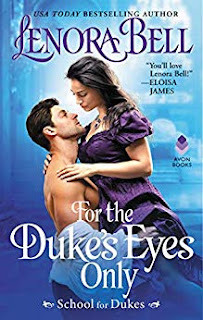 For the Duke's Eyes Only is book 2 in the School for Dukes series. Can we just take a second to love this cover? It's so gorgeous, the cover lover in me is very pleased. I also adore Lenora Bell's books so I was really excited to start reading this one. She has rather unconventional characters and the romance is swoon worthy!

We start off this novel meeting Lady India Rochester (aka Indy) and Daniel Bonds while they are children, digging for treasure and sharing their dreams. Their families have a marriage contract between them and everyone is happy with that decision. That is until Daniel's father dies and his loyalty is being questioned, Daniel and his mother leave. Fast forward 15 years to Indy trying to sneak into an all male Society of Antiquaries. She thought her only worry would be if her fake mustache would fall off but she walks in to see Daniel, the Duke of Ravenwood there. Her whole plan was to sneak in and get a look at the Rosetta Stone and translate the hieroglyphics. What they both uncover is that someone swapped the artifact with a fake and Indy is one of the few that can identify the real deal. Ravenwood isn't afraid of a dangerous situation, but he doesn't want Indy anywhere near it. Stubborn, Indy gets her way and they head to Paris to track down the stone. Romance meanwhile blossoms as these two get a second chance at love if they can just get past the dangerous situations that arise.

For the Duke's Eyes Only is a steamy Historical Romance with lots of intrigue and adventure. I really enjoyed Indy's character, and can only guess she's loosely based on Indiana Jones. That being said, I was a bit disappointed at the ending, it wrapped up the missing item quite fast with little to no effort on their part. I was happy with pretty much everything else though so it was still quite a good read. If you're looking for an unconventional leading lady in Historical Romance, this is the book for you.