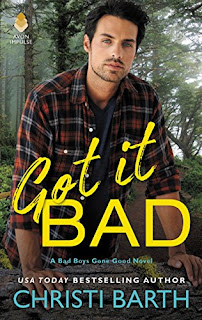 Got it Bad - Christi Barth
Kellan Maguire was a semester away from becoming a lawyer when his life imploded. Now he’s in Witness Protection, hiding from the mob and mad as hell that his brothers lied to him about, oh, everything. The only bright spot in his new life is their drop-dead-gorgeous U.S. Marshal handler. Yeah, he wants to handle her... a lot.

Federal Marshal Delaney Evans has protected her fair share of dangerous criminals. But Kellan is a whole different kind of dangerous—dangerously hot, to be specific. The charming, handsome, and utterly law-abiding Maguire brother got under her skin the moment they met and the more time she spends with him, the harder it is to deny their attraction. Delaney’s willing to give Kellan one night—to get him out of her system—and then it’s over.

Except one night isn’t enough and soon they’re breaking every rule of WITSEC to be together. Kellan’s got it bad for her, but Delaney’s career, her entire life, would fall apart if anyone found out. And then the biggest complication of all hits… 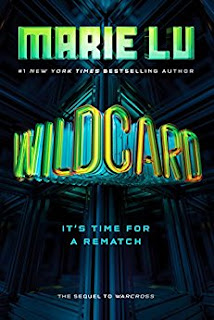 Wildcard - Marie Lu
Emika Chen barely made it out of the Warcross Championships alive. Now that she knows the truth behind Hideo's new NeuroLink algorithm, she can no longer trust the one person she's always looked up to, who she once thought was on her side.

Determined to put a stop to Hideo's grim plans, Emika and the Phoenix Riders band together, only to find a new threat lurking on the neon-lit streets of Tokyo. Someone's put a bounty on Emika's head, and her sole chance for survival lies with Zero and the Blackcoats, his ruthless crew. But Emika soon learns that Zero isn't all that he seems--and his protection comes at a price.

Caught in a web of betrayal, with the future of free will at risk, just how far will Emika go to take down the man she loves? 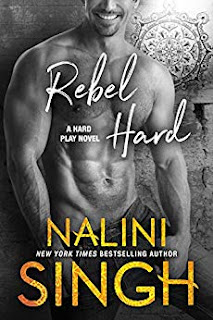 Rebel Hard - Nalini Singh
Nayna Sharma agreed to an arranged marriage in the hope it would heal the fractures in her beloved family… only to realize too late that a traditional marriage is her personal nightmare. Panicked, she throws caution to the winds, puts on the tiniest dress she can find, and ends up in the arms of a tall, rough-edged hunk of a man who has abs of steel—and who she manages to mortally insult between one kiss and the next.

Abandoned as a child, then adopted into a loving family, Raj Sen believes in tradition, in continuity. Some might call him stiff and old-fashioned, but he knows what he wants—and it’s a life defined by rules… yet he can’t stop thinking about the infuriating and sexy woman who kissed him in the moonlight then disappeared. When his parents spring an introduction on him, the last woman he expects is her. Beautiful. Maddening. A rule breaker in the making.