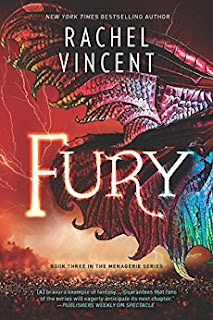 1986: Rebecca Essig leaves a slumber party early but comes home to a massacre—committed by her own parents. Only one of her siblings has survived. But as the tragic event unfolds, she begins to realize that other than a small army of six-year-olds, she is among very few survivors of a nationwide slaughter.

The Reaping has begun.

Present day: Pregnant and on the run with a small band of compatriots, Delilah Marlow is determined to bring her baby into the world safely and secretly. But she isn’t used to sitting back while others suffer, and she’s desperate to reunite Zyanya, the cheetah shifter, with her brother and children. To find a way for Lenore the siren to see her husband. To find Rommily’s missing Oracle sisters. To unify this adopted family of fellow cryptids she came to love and rely on in captivity.

But Delilah is about to discover that her role in the human versus cryptid war is destined to be much larger—and more dangerous—than she ever could have imagined.

Weaving together past and present in this heartbreaking tale of sacrifice and self-discovery, Fury is the deeply moving finale to a series that readers won’t soon forget.

Why I am waiting:
I'll be interested in seeing how this trilogy concludes. These haven't been easy reads but the story seems to hook me.