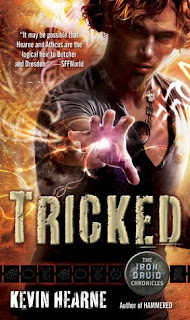 Tricked is book 4 in The Iron Druid Chronicles. This one is actually a re-read for me, but I did the audiobook format this time since I'm currently binge listening to the series. I highly recommend these in the audio format, the narrator is a perfect fit and brings the characters to life.

Atticus O’Sullivan the last of the druids starts us out with a bang by making a deal with Coyote, the trickster god. After the events in the previous novel the thunder gods are out for Atticus' head and will stop at nothing until he's dead. Coyote kindly takes the hit in return for Atticus owing him a favor. Things seem to be going according to plan until Coyote fails to tell Atticus the place he's helping with has skinwalkers that want to defend their territory. They just need to get through this so he can train his apprentice, Granuaile.

The books just keep getting better and better in this series. Tricked is setting up for adding another druid into the mix and hopefully they can just find the time without people gunning for them. I really liked that we're seeing Native American legends included this time instead of the norm. If you're a fan of Urban Fantasy with non-stop action you need to try this series.