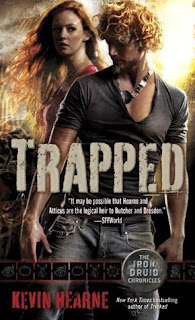 Trapped is book 5 in The Iron Druid Chronicles. I'm still loving this series and still have 4 more books to go. My library is awesome and actually has most of them in stock right not so as soon as I finish up a few other review books I'm going to marathon the rest of the series. The Iron Druid Chronicles is an Urban Fantasy that's pretty unique, has a great mix of paranormal beings and has mythology mixed in. It's a must read.

There's a bit of a time jump from the previous novel to this one. We're now 12 years later and Atticus O’Sullivan has trained his apprentice Granuaile and all he has left to do is bind her to the earth and she'll be a druid. Things are never easy on them though, the day before he starts the binding they're found and people are going to look for him. They wind up in Mount Olympus to do the binding but it seems like something was leading them there for a trap. There is also a romance aspect added in and I'm happy it finally happened.

Trapped is a great turn of events for the series and I'm excited to see where it goes in the next book. Atticus always manages to have people coming after him which means it's lots of action and adventure. Oberon is always a hoot and I wind up laughing at loud at some of the things he says. If you're a fan of awesome Urban Fantasy books you need to try this series.