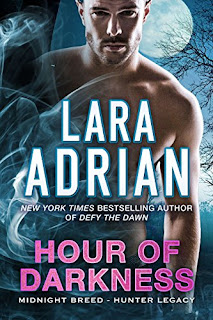 Born and raised as an assassin in the notorious Hunter program, Breed vampire Cain has since put his specialized skills to use as a mercenary willing to clean up any problem for a price. Or so he thought. After a job in Las Vegas strains even his dubious code of honor, Cain pulls up stakes and lands in Miami for a much-needed break. All he wants is time away to clear his head and regroup, but then a beautiful young woman is nearly killed in front of his eyes and the ruthless former Hunter becomes the only thing standing between her and a sniper’s bullet.

Marina Moretskova is no stranger to dangerous men. As the niece of a Russian organized crime boss, she’s grown up around killers and criminals. But her uncle wants out now, and he’s enlisted Marina’s help in buying his freedom by delivering valuable intel to a secret contact in exchange for protection. Not even Marina’s bodyguards are aware of her mission, so when an attempt on her life is averted by a handsome, steely-eyed vampire, as grateful as she is for Cain’s intervention, the last thing she needs is the shrewd Breed male nosing around for answers. Cain’s cold, haunted gaze and merciless abilities attest to his brutal nature, yet the rough, solitary Hunter stirs a powerful longing in Marina—a darkly seductive hunger
—that she can neither afford nor resist. With a target on her back and covert enemies closing in from all sides, trust is a risk that can prove deadly . . . and the safest shelter she may find is in the arms of the most lethal man she’ll ever know.

Why I am waiting:
I must be in a vampire mood since my pick last week and this one has vampires! I probably need to grab book 1 before I start this but it sounds good!!