Review: Owl and the Tiger Thieves by Kristi Charish 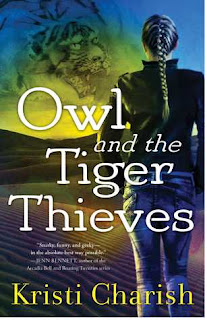 Owl and the Tiger Thieves is book 4 in The Adventures of Owl series. I've really been loving this series and knew I had to grab this installment. Owl's human but always seems to get mixed up in trouble with the different paranormal beings along her adventure. This series is like a mash up of a female Indiana Jones with tons of adventure and paranormal issues that pop up at every step Owl takes.

Alix Hiboux aka Owl is an antiquities thief that works for a dragon you do not want to cross. That kind of takes a back seat this novel though since our leading lady is dealing with the fall out of everything that happened in the previous book. Her main goal is to figure out how to stop the Electric Samurai that was unleashed, he's determined on taking over and not afraid to hurt anyone in his path. He's amassing an army and Owl is trying to stay one step ahead while also seeking help from the Tiger Thieves that might be able to stop him. The only issue with that being the Tiger Thieves are well hidden and each time she gets a new clue the Electric Samurai and his minions are there and major destruction seems to occur. This installment is a rush against the clock and I was nervous that Owl might not be able to win this time around.

Owl and the Tiger Thieves is a nonstop adventure that will have you on the edge of your seat. We get to see a bit of a different side of Owl and I'm glad, her character's growing and really trying her best even if she's reckless at times. I'll be interested in where this series goes from here because we got thrown for a loop with this ending that's for sure. If you're a fan of Urban Fantasy with tons of adventure and tons of interesting paranormal beings this is the series for you.