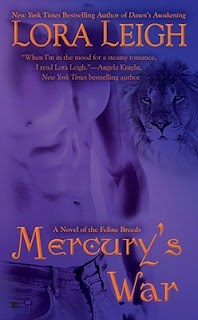 Mercury's War is book 12 in the Breeds series. I kind of just jump into series where ever I want and I think that might have been a bad decision for this series. I'll have to backtrack and try book 1 in the future to see if it's the writing style I didn't enjoy or just because I had no back ground on the world/characters.

Ria Rodriguez is sent to uncover who is leaking information at the Sanctuary. Mercury Warrant is basically working as her bodyguard and despite Ria's prickly nature Mercury is drawn to her. The thing is, Mercury lost his mate when he was younger and won't ever feel the mate bond again. I was wondering how that would work out since this is a paranormal romance and guessed what would happen pretty fast. They're both kind of hesitant and then it's just like YES let's enjoy ourselves. There's several surprises thrown at us in the last half of the book that I didn't see coming. Ria has a pretty big secret and we find that out along with Mercury. I wasn't that drawn into the the who's leaking data plot though the sexy times were pretty hot. I'm guessing my disconnect is because I'm not too familiar with the world/series but we'll see whenever I try another book in the series.

Mercury's War is a steamy read with a sexy lion shifter. While it didn't quite hit the mark for me, I did think the book itself was good. I was intrigued by some of the characters and it looks like each book has different leads. If you've read the series and like some serious steam in your books try this novel.