Review: Hooked On You by Kate Meader 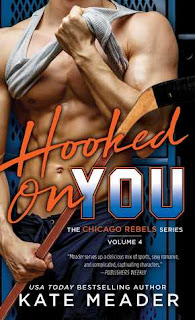 Hooked on You is book 3 of the Chicago Rebels series. I've been waiting on this book for awhile now since I wanted Violet's story! This series revolves around 3 sisters that became owners of their father's hockey team after he passes. Each of the sisters gets her own book as a lead character, I love seeing how the romance blossoms with a hockey player and the main plot is expanded in each installment.

Violet Vasquez is the wild child of the sisters, she has no problem speaking her mind and doing what she wants. I've been wanting her story since we met in her book 1 and I'm kind of glad she was saved for last. Violet really isn't that into helping with the hockey team and says she's just sticking around to see if the team wins so she can sell out her shares of the company to the sisters for a much higher price. I think really she's trying to find her place in life, after dealing with breast cancer and gaining two sisters she barely knew anything about she's just trying to see what is going to happen. Add in one sexy hockey player she can't get off her mind and she has a good reason to stay around.

Bren St. James, the sexy hockey player in question is trying his best to be a great father for his two little girls. Their mother (his ex-wife) is taking a break so the girls are in his care. He's almost a year into being alcohol-free and things are starting to change in his life. With the team doing well and going into the playoffs he needs a nanny for the girls and Violet steps up to lend a hand. Being in close quarters is bringing some serious temptation that neither can resist. While this installment does get some serious steam I don't find it as hot as the other books. That might be the addition of kiddos to the story though since I'm not usually a fan of those in romance novels, yet this somehow worked well for me so yay!

Hooked On You is a steamy read that will have you wanting a sexy hockey player of your own. I love KMeader's writing style, she really has a way with writing the characters that you get sucked into the book and next thing you know you've read it all in one sitting. There was a nod to her other series, Hot in Chicago since some of the characters got a brief cameo which I loved. We finally got to see if the Rebels won the playoffs and a little bit further into each of the sisters lives. If you're a fan of sports contemporary romances grab this series, you can thank me later.