Review: Undone By You by Kate Meader 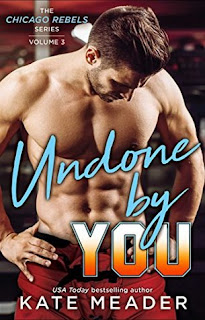 Undone by You is book 3 in the Chicago Rebels series. I'm loving this series so I grabbed it as fast as I could. I'm not usually a fan of M/M romances, but I've tried one of Meader's books in that genre before and really enjoyed it. I am happy to say this one was a great read for me! If you like hockey and a seriously sexy read, grab this series.

We're changing things up this time around and instead of one of the three sisters as the lead we have the GM of the Chicago Rebels hockey team as the main character. Dante Moretti recently became the GM for the team and he's the first openly gay man in that role. He's out at a gay bar/club one night when he spots one of his team members, Cade “Alamo” Burnett, a bit shocked he goes to talk to him and realizes that Cade wants him and not just as his GM. Dante tries to keep it professional while still being there for support and to help guide Cade if he wants to come out. Of course keeping it professional doesn't last long since they have some serious chemistry.

Undone by You is a steamy M/M read you won't want to put down. I can't get enough of Meader's books, her writing style is so addictive for me. The romance aspect always makes the characters work for it, while being scorching hot. This does show a bit of a different prospective since the timing coincides a bit with book two. If you're a fan of sports related contemporary romances grab this series as fast as you can, you won't regret it.