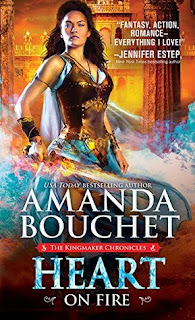 Heart on Fire is the final book in the Kingmaker Chronicles. I'm kind of sad this is only a 3 book series, but I'm hoping there will be a spin off since I really enjoyed the world. If you're a fan of strong female leads in a paranormal world you'll love these books.

This time around Cat is working hard at being strategic in her battles, and boy it's going to be a big one. Cat typically rushes head first into the trouble and sometime finishes it unscathed but more times than not she's injured badly. This isn't her typical fight though, she's going up against her mother, a woman with a great resource of power and knows exactly what weaknesses she has. With Griffin by her side and their family and friends they're taking over a neighboring city to try to amass an army big enough to handle her mother's troops. This is all in the goal to unify the land and bring peace to their communities. Cat's taking precautions and trying to figure out how to harness her magic fully and not just relying on some of the powers showing up when they choose to. This installment is a bit different, we're seeing a lot of turmoil with Cat trying to make the decisions she needs to for the better good. There are a few battles but we finally have the big battle that the series has been leading up to. I was a bit anxious to see how it would pan out and if Cat and the team could handle it since I knew there would be casualties.

Heart on Fire was a pretty good conclusion to the series, though I'm still wanting more since I enjoy the books, I know I'm greedy. As I said before, I hope we get a spin off of the series since I do love quite a few characters and would be intrigued by their POVs to further the story. I LOVE that there is mythology mixed into the plot, though a bit mixed on Cat having such godly powers if/when she can figure out how to use them. All in all, this series is a must read for mythology + fantasy romance lovers out there.

I thought Mia Barron did a great job narrating this series. I knew I couldn't do these books in any other format when I listened to book 1 since she channeled the characters so well. Her voice is expressive and I could easily tell the characters apart.