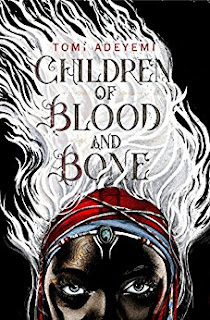 Children of Blood and Bone - Tomi Adeyemi
They killed my mother.
They took our magic.
They tried to bury us.

But everything changed the night magic disappeared. Under the orders of a ruthless king, maji were killed, leaving Zélie without a mother and her people without hope.

Now Zélie has one chance to bring back magic and strike against the monarchy. With the help of a rogue princess, Zélie must outwit and outrun the crown prince, who is hell-bent on eradicating magic for good.

Danger lurks in Orïsha, where snow leoponaires prowl and vengeful spirits wait in the waters. Yet the greatest danger may be Zélie herself as she struggles to control her powers—and her growing feelings for an enemy. 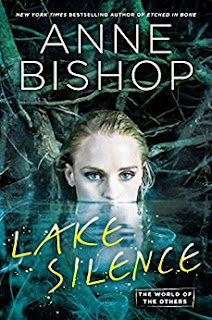 Lake Silence - Anne Bishop
Human laws do not apply in the territory controlled by the Others--vampires, shape-shifters, and even deadlier paranormal beings. And this is a fact that humans should never, ever forget....

After her divorce, Vicki DeVine took over a rustic resort near Lake Silence, in a human town that is not human controlled. Towns such as Vicki's don't have any distance from the Others, the dominant predators who rule most of the land and all of the water throughout the world. And when a place has no boundaries, you never really know what is out there watching you.

Vicki was hoping to find a new career and a new life. But when her lodger, Aggie Crowe--one of the shape-shifting Others--discovers a murdered man, Vicki finds trouble instead. The detectives want to pin the death on her, despite the evidence that nothing human could have killed the victim. As Vicki and her friends search for answers, ancient forces are roused by the disturbance in their domain. They have rules that must not be broken--and all the destructive powers of nature at their command. 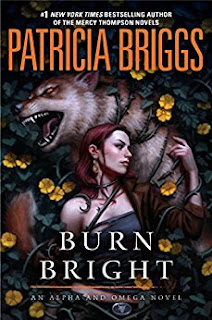 Burn Bright - Patricia Briggs
They are the wild and the broken. The werewolves too damaged to live safely among their own kind. For their own good, they have been exiled to the outskirts of Aspen Creek, Montana. Close enough to the Marrok's pack to have its support; far enough away to not cause any harm.

With their Alpha out of the country, Charles and Anna are on call when an SOS comes in from the fae mate of one such wildling. Heading into the mountainous wilderness, they interrupt the abduction of the wolf--but can't stop blood from being shed. Now Charles and Anna must use their skills--his as enforcer, hers as peacemaker--to track down the attackers, reopening a painful chapter in the past that springs from the darkest magic of the witchborn... 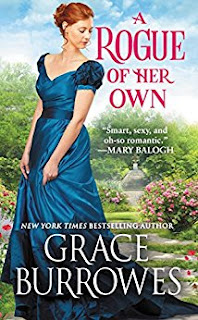 A Rogue of Her Own - Grace Burrowes
For Miss Charlotte Windham, the best way to maintain her spinsterhood-and her independence-is a teeny, tiny brush with scandal. She chooses wealthy, handsome upstart Lucas Sherbourne as her unwitting accomplice. He's intelligent, logical, and ambitious. What Charlotte doesn't count on is that one kiss will lead them straight to the altar.

Sherbourne has no love for polite society, nor is he keen on being anybody's husband of last resort. He is attracted to Charlotte's boldness, though-and her family's influence. Without a title, he knows he'll never truly be part of their world, even as he and Charlotte inch closer to a marriage that means much more than convenience. But a scheming business partner is about to test that tenuous trust, forcing Sherbourne to make a drastic choice: his wealth or his wife. 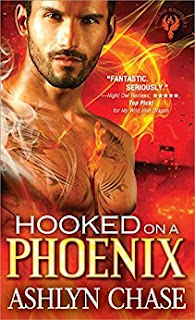 Hooked on a Phoenix - Ashlyn Chase
Misty Carlisle works as a bank teller in Boston's financial district. She's had more rotten luck in her life than most, except when her childhood crush shows up to cash his paycheck. Then her heart races and her mouth goes dry.

Gabe Fierro is a firefighter—and a phoenix. Like his brothers, his biggest challenge is finding a woman open-minded enough to accept a shapeshifter into her life. When his boyhood friend asks him to watch over his little sister Misty, he reluctantly agrees. But when the bank where she works gets held up, Gabe does everything he can to protect her. The two of them end up locked in the bank's vault...where things get steamier than either of them ever imagined. 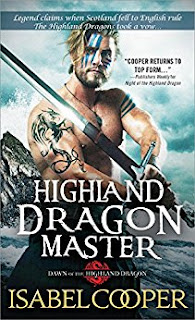 Highland Dragon Master - Isabel Cooper
He swore to protect Scotland to his last breath
But when terror rules the seas, he'll have to make a choice:
Give everything he has for independence, or trust in the dragon who rules his heart.

The war for Scottish independence rages on, but it's only a matter of time before England is victorious. Exhausted and battle-weary, Highland dragon Erik MacAlasdair will face unknown seas to seek the Templar stronghold and claim a power so great it could free his beloved homeland forever.

If only that kind of power didn't come with such a terrible price.

Daughter of a mortal woman and an ancient dragon, Toinette has never forgotten the proud Scot who once stole her young heart—she'll gladly fight at his side. But when dark forces leave them stranded on a cursed island, it will take everything they have to defy their fate...and trust the passion that burns within the heart of every dragon. 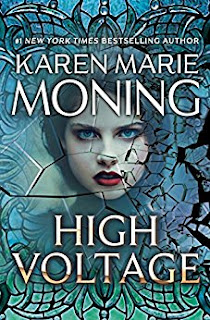 High Voltage - Karen Marie Moning
There is no action without consequence.

Dani O’Malley was nine years old when the delusional, sadistic Rowena transformed her into a ruthless killer. Years later, Dani is tough and hardened, yet achingly vulnerable and fiercely compassionate, living alone by her own exacting code. Despite the scars on her body, and driven by deeper ones carved into her soul, no one is more committed to protecting Dublin. By day she ensures the safety of those she rescues, by night she hunts evil, dispensing justice swiftly and without mercy, determined to give to those she cares for the peace she has never known.

There is no power without price.

When the Faerie Queen used the dangerously powerful Song of Making to heal the world from the damage done by the Hoar Frost King, catastrophic magic seeped deep into the earth, giving rise to horrifying, unforeseen consequences—and now deadly enemies plot in the darkness, preparing to enslave the human race and unleash an ancient reign of Hell on Earth.

There is no future without sacrifice.

With the lethal, immortal Ryodan at her side, armed with the epic Sword of Light, Dani once again battles to save the world, but her past comes back to haunt her with a vengeance, demanding an unspeakable price for the power she needs to save the human race. And no one—not even Ryodan, who would move the very stars for her—can save her this time.
Posted by LilyElement at 12:00 AM