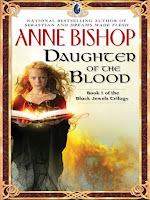 This is a reread for me but I tried these in audiobook format this time around. I read these back in high school (~10 years ago) and knew I had to revisit the series since I'm wanting more books by Anne Bishop. This series is way different from Bishop's The Others series, but I binge listened to them back to back because they're so good. While this world is dark and full of triggers for readers it's worth a listen/read if you're into dark fantasy novels.

This series revolves around Jaenelle Angelline, who starts out as a child in book 1. She's one of the Blood, and wears the darkest jewel (strongest magical power) even at childhood. Her life at home is horrible and no one really understands her so she goes exploring to escape and this is when we meet the rest of the lead roles. Saetan SaDiablo takes the role of her father figure and tries his best to teach Jaenelle how to harness her powers while being a role model. Daemon Sadi SaDiablo takes the protector and future consort figure and he goes through so much just to be by her side, it was heartbreaking. Lucivar Yaslana winds up becoming her honorary brother and also a protector, he knows when to push Jaenelle when she needs it and when to be there for support.

As the books progress we watch Jaenelle grow into her powers and how dark this world really is. Our characters go through a lot to ensure she reaches adulthood intact. Her few friends make strong allies which is good because they're going up again some of the Blood that is under the thumb of a corrupt leader. Her main goal throughout the books is to rid the corruption and make their world how it should be. I thought it was interesting that the women are the leaders in this world, a lot of them take their power for granted and abuse the males. Like I said earlier there are a lot of triggers for readers in this series. Just to name a few there is rape, sex slaves, abuse both mental and physical, and mutilation. If you can get past that, and you like fantasy novels, you'll probably enjoy this series.

John Sharian is another male narrator I can add to my need to listen more of list. I'm really picky with male narrators for some reason but I found he did a good job at representing the characters.