Review: Irresistible You by Kate Meader 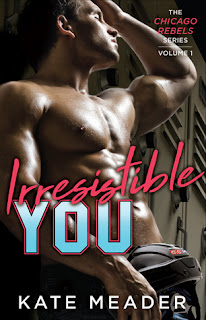 Irresistible You is book 1 in the Chicago Rebels series. I don't read many sports related romances, and found this refreshing! Kate Meader writes seriously steamy Contemporary Romances and I really enjoy her writing style overall. If you haven't tried out one of her books yet you need to.

Harper Chase is thrown for a loop when her father passes away and leaves his hockey team, the Chicago Rebels to Harper and her two half-sisters. They pretty much have had no contact but they don't exactly get along. The ladies all decide to try their best to meet the terms in his will and turn the second worst team in the NHL into one that will enter the playoffs all within a season. Harper is the coolheaded sister that is all work and no play. She's trading in players she thinks will help and the newest recruit is giving her enough trouble she flys to his house to give him a nudge in the right direction. This is when we learn that Remy “Jinx” DuPre wants to win the cup before he retires in the near future and Harper is ruining all his plans. The two get under each other's skin and though they bicker like nonother, there is an undeniable attraction that neither can resist. We see the team banding together to do their best but everything is questioned when word gets out about the agreement Harper and Remy made. The book is well balanced with the romance as well as seeing how the hockey team and the staff are doing and it leads to a really entertaining read that doesn't drag.

Irresistible You is a steamy hockey romance that you need to grab. Harper's character, in particular, I really enjoyed. You see her icy exterior with everyone but underneath that, you see she's like everyone else. Remy has a habit of bringing that out and boy do they butt heads. I thought they were a good balance for one another and I enjoyed seeing what would happen next. If you're a fan of hockey romances you'll adore this series.