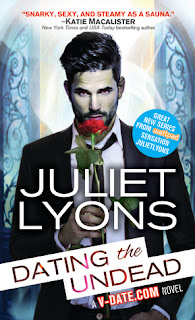 Dating the Undead is book 1 in the Bite Nights series. I've been on a paranormal kick lately and had to try this one when I saw it on the library website. It was a fun listen and I'll grab the next book when I see it.

Silver Harris is enjoying herself at a New Year's Eve party when she sees her date with another woman. She breaks it off and leaves in a big scene only to bump into Logan Byrne, a vampire. Sparks fly and after walking her home they part ways not expecting to see one another again. Both can't get the other out of their minds and I was really wondering how they'd reconnect. Silver decides to try dating vampires after her encounter with Logan and signs herself up to a dating website specific for humans meeting vampires. After some crappy dates with gorgeous vampires, Silver winds up getting saved by Logan and the attraction between the two is undeniable. There is a bit of an ulterior motive going on and a mystery that we get revealed near the end that I didn't exactly see coming.

Dating the Undead was a fast read and fit the bill for a paranormal romance that I was looking for. I enjoyed the characters, though Silver did make some foolish decisions. It was interesting seeing the different aspects of these vampires vs others in the genre, which I thought was unique. All in all, this was a pretty good read and I'd recommend it to someone looking for a Paranormal Romance.