Review: The Trouble with Twelfth Grave by Darynda Jones 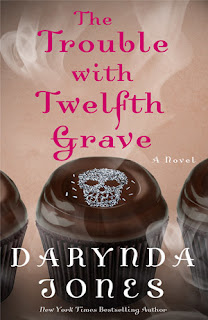 The Trouble with Twelfth Grave is book 12 in the Charley Davidson series. I finally caught up to the current book, it took awhile but now I'm going to miss these marathon sessions. This series is an addictive Urban Fantasy that you can't pass up.

We go a bit different in this installment, with the huge cliffhanger from the previous book we see a different side of Reyes than we normally do and not in a good way. It had me a bit worried if Charley would be able to get her man back to the way he was. Don't get me wrong, he's still super sexy but he's more brutal and just not the same. While most of the story is Charley working on finding Reyes and trying to figure out how to get him back, we do have her hunting down a murderer that's killing people that seem to have no connection. It had me intrigued and we got to learn a few things along with Charley along the way. How DJones manages to weave in the plots so seamlessly always impresses me and it takes the series story arc even further.

The Trouble with Twelfth Grave is a can't miss addition to an addictive series. Charlie and the gang are doing their best to find the murderer as well as find Reyes. Everything is tossed up in the air this time around and I was really questioning everything. My only complaint is that I'm not a huge fan of the really big cliffhangers at the end of this book and the previous installment. Now I want the next one immediately but since I'm caught up it'll be awhile before the next is released, first world problems. All in all, this was a great addition to the series and I can't wait to see what happens next. If you're a fan of humor mixed into your paranormal read you'll adore this series.

Lorelei King did a wonderful job in narrating this installment. She brings the book to life, and I know I cannot do this series in any other format.