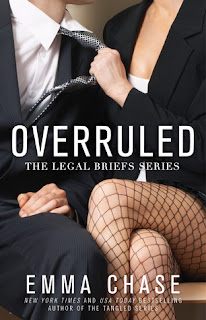 Overruled is book 1 in The Legal Briefs series. I knew I had to try this series after seeing such good reviews for it. So when Audible had a 2 for 1 credit sale going on and these were on there, I grabbed them as fast as I could. While starting out in DC we head to a small town for a good chunk of the story, and I love novels that have that vibe.

We start off meeting a young Stanton, about to go off to college, when he finds out his girlfriend Jenny is pregnant. They make an agreement that they'll have an open relationship but when he's in town they'll be together. We quickly see him in college and not getting many chances to be in their lives. Then we reach the present where Stanton is a DC defense attorney and charming a jury on a case he's handling with his coworker Sofia Santos. It's not all work and no play though, Sofia and Stanton have a friends with benefits arrangement. Then we get the drama mixed in, Stanton finds Jenny is getting married and he's very distraught. He does the only thing he can think of, hightails it back to his hometown to stop the wedding and win back his woman. But he knows he can't do it himself, he asks Sofia to come with him to help. I was wondering if he'd realize he was clinging to the past when really he had feelings for Sofia all along.

Overruled is a steamy contemporary romance that made me actually like a lawyer main character. That's pretty much unheard of for me, I really don't like lawyer characters in stories, but knew I had to try this series out since I've enjoyed other books by Emma Chase. While a bit predictable at times, the story was quite entertaining with all the different things going on. If you're a fan of drama in your romance and some seriously steamy scenes, you'll love this book!

This was one of the few dual narrated audiobooks I've listened to and it reminds me how much I enjoy them! Jason Carpenter and Charlotte Penfield did a great job at bringing their characters to life.