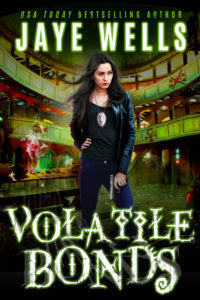 Volatile Bonds is book 4 in the Prospero's War series. It's been awhile since a new book has been released in this series and I was so happy to see that it would be continued! We're back in the action with Detective Kate Prospero tracking down the bad guys/gals that have some sort of magical crime.

In this installment, Kate Prospero is working on a case that left a coven member dead and a new mysterious dirty magic is popping up on the street that's leaving people dead. While trying to dig up details about the drug we find out that something is amiss and a new power player seems to be in the Cauldron and they're not above playing dirty. Kate and her partner Morales have to figure out who's behind it all before the clock runs out. With a shocking twist that I didn't see coming, this book is a must-read.

Volatile Bonds brings another great addition to a series I've missed a ton. I really enjoy Jaye Well's writing style. Kate's character is determined to do her best professionally as well as on a personal level. I love that while the story does mainly focus on the cases, we do get to see her friends as well as her little brother that she takes care of. Kate's also not a perfect character, she makes mistakes and has to own up to them. My only big complaint is that I could have done without the random broken English from the Chinese leader. The woman was playing naive and it was probably meant to portray that but she spoke perfect English before and after that moment so it kind of bugged me. Other than that though I thought this was a great addition to the Prospero's War series and cannot wait to see what happens in the next book. If you enjoy Urban Fantasy with a detective or magic you'll love this series.