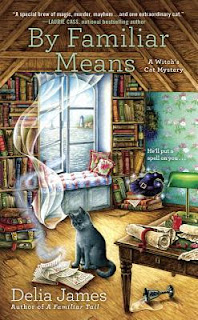 By Familiar Means is book 2 in the Witch's Cat Mystery series. While I haven't read the first book in the series, I knew I had to try this out because it's a mystery plus paranormal! I wound up really enjoying it and will have to backtrack to book 1 now. If you're a fan of paranormal + mystery grab this series asap!

Annabelle Britton (aka Anna) is an aspiring artist and also a witch that is still learning the ropes on how to control her powers. She's moved to Portsmouth, New Hampshire has some awesome friends, a coven and now her grandmother that is also a witch has reentered the picture. We start off with Anna going to check out the new location for the coffee house that she's been hired to paint murals for. After some spooky ghostly activity, she and the owners get a strong vibe that they have to check out the basement which leads to the discovery of a smugglers tunnel. It winds up leading to a dead body and the coffee shop owners and Anna are listed as suspects. Anna and her cat familiar, Alastair are determined to find the other end of the tunnel before the killer strikes again, and don't you know he/she will be coming after them next!

By Familiar Means was a magical mystery I didn't want to stop listening to. I really enjoyed the characters and the mystery element had me questioning who the killer was. I have to admit I loved that magic was added into this book, I need to try out more mysteries with paranormal elements! If you're a fan of mystery novels and/or witches you'll love this book.

I thought that Elise Arsenault did a great job infusing the characters with personality. It was easy to figure out which character was which, each had their own distinct voice.