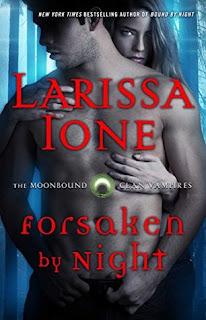 After accidentally shifting into a wolf—and getting stuck—Tehya, herself a vampire, has spent the last twelve years as the pet of Lobo, another vampire who has the unique gift of communicating with wolves.

When Lobo found Tehya starving and nearly frozen to death, he took her in and nursed her back to health, all the while completely unaware that she was really a fellow vampire. But there was always something special about her, and he finds out exactly how special after she’s injured and returned to her true form. Desire collides with danger as he soon finds that he must protect not only Tehya but also himself...

Why I am waiting:
It's been awhile since I've seen a new Larissa Ione book. Guess I've missed some, at least this novella sounds pretty good!