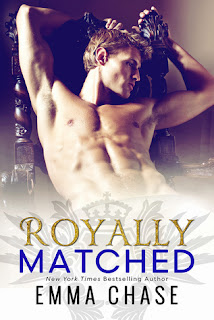 Royally Matched is book 2 in the Royally series. I enjoyed the first book and was interested in seeing how the brother would handle the curve ball thrown at him in the previous book. We switch POV's in this installment to Prince Henry who is learning how to shoulder the responsibility of being next in line to the throne.

Henry Pembrook the Prince of Wessco is struggling living in the limelight of being the Prince. After the events in book one, Henry is slated next in line to the throne after living his entire life not expecting it. It comes with a steep learning curve and trying to fulfill the expectations of his Grandmother, the Queen. After he messes up royally he's set off to an estate and that's where he's approached by a TV producer with the idea Matched: Royal Edition. It's pretty much what you expect, lots of upper crust young ladies vying for the Prince's affections and the one that wins has a chance of marrying Prince Henry.

Sarah Von Titebottum, a librarian, and her sister are two of the ladies in the show. Though Sarah quickly dismisses herself from the show only to be there to support her sister. Henry seems drawn to our shy librarian though and each passing day we see their relationship grow. I wasn't sure how I'd feel with having Henry be interested in her yet still playing the part of trying to find his possible bride while filming the show. It grew to annoy me a tad but overall I loved Sarah and Henry relationship and how they treated one another. This novel was a light and fast read for me that I really enjoyed.

Royally Matched had me crushing after a prince yet again. I don't really read all that many books with royalty in them but I seem to like it when Emma Chase works her magic on it. I enjoyed this installment a bit more than book one, I think mainly because of the leading lady. She was so shy and timid initially yet as we learned more about Sarah I grew to want her POV more and more. If you're a fan of Contemporary Romance with librarians or royalty you'll adore this book.

FYI: There is a follow up novella, Royally Raised, that takes place 20 years after Royally Matched for free currently on Amazon. I wouldn't read it without reading Royally Matched though since it looks to be a continuation.