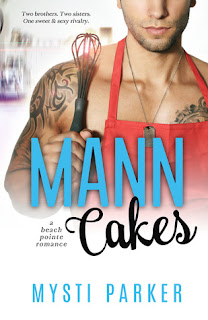 Mann Cakes is a standalone novel about two brothers opening a savory cupcake bakery in their home town. This novel revolves around two different sets of siblings and their respective cupcake shops and the romance that follows. I've really been loving books that have baking in them lately so I had to try this one out!

Tanner and Garrett Mann are having a hard time settling in after coming back from their deployment to Iraq. They find out their business was burned down while they were gone, so they're left to go back to their hometown and try to start over. While in Beach Point, they come up with the genius idea to open a cupcake shop that makes savory cupcakes. The whole idea is to give men an option they would actually want to eat at a party. What they didn't expect was them opening their business would take away customers from the Two Sisters Cupcakes run by Paige and Morgan Baxter. Paige and Tanner have a romantic history from back in high school that is causing some major tension between the duo and then we have Morgan and Garrett who have always wanted to date but never got the chance. In this novel, you actually get to see both romances happen along with a bit of whodunit when someone seems out to cause the brothers trouble.

Mann Cakes was a yummy mix of romance, second chances and a dash of mystery. I was a bit mixed on this book mainly because of the parallels between the different romances. Then we had a bit of relationship building that had love entering the picture fast. I feel like it would have been stronger if it had focused on one couple and then had a second book with the other siblings as the leads. Don't get me wrong though, this was still a good read. I'd recommend this book if you're a fan of romance with baking mixed in.

This was my first book narrated by Addison Spear and won't be my last. I thought she did a wonderful job and enjoyed her narration of the story.

I was given this free review copy audiobook at my request and have voluntarily left this review.