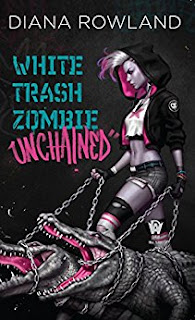 Angel Crawford has finally pulled herself together (literally!) after her disastrous dismemberment on Mardi Gras. She’s putting the pieces of her life back in order and is ready to tackle whatever the future holds.

Too bad the future is a nasty bitch. There’s a new kind of zombie in town: mindless shamblers, infectious and ravenous.

With the threat of a full-blown shambler pandemic looming, and a loved one stricken, Angel and the “real” zombies scramble to find a cure. Yet when Angel uncovers the true reason the plague is spreading so quickly, she adds “no-holds-barred revenge” to her to-do list.

Angel is busting her ass dealing with shambling hordes, zombie gators, government jerks, and way too many mosquitos, but this white trash chick ain’t giving up.

Good thing, since the fate of the world is resting on her undead shoulders.

Why I am waiting:
Oh my goodness you guys. I completely forgot about this series. I read book one and enjoyed it and even bought book two but lost it somewhere in my endless bookshelves. I think I'm going to check if the library has any of these if not I'll be grabbing them shortly!!