Review: The Utterly Uninteresting and Unadventurous Tales of Fred, the Vampire Accountant by Drew Hayes 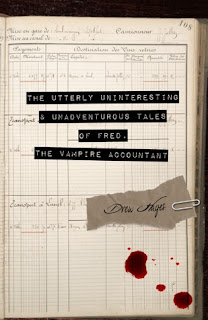 Fred is such a different take on vampires that I'm used to. He's not a vicious killer or a swoon-worthy hero with fangs. He's exactly what you'd picture if you asked yourself what a vampire accountant looked like. He wears a sweater vest, and glasses and really doesn't like confrontation. This novel is full of short stories about Fred, and I enjoyed each story more than I expected, mainly due to the humor mixed in. We get a good dose of other paranormal beings throughout the stories from werewolves to necromancers. We even see Fred get a girlfriend which fit the story well.

Fred, the Vampire Accountant was a really different take on vampires and I appreciated the originality and the humor. If you're a fan of vampires or want to try something different from the norm you should pick this book up!

This was my first audiobook narrated by Kirby Heyborne and I thought he did a wonderful job. I found he suited Fred's character really well and it was easy to get sucked into the story.