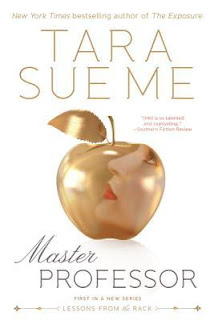 Andie Lincoln is an everyday girl that winds up dating Terrence Knight, a famous actor. She finds out that Terrence is dominant and wants to learn how to be his submissive. He doesn't have enough time to teach her with his filming schedule so he pulls some strings and enrolls her in the RACK Academy. I was kind of iffy going into the story since Andie and Terrence are dating, yet the love interest is someone else. The author played it very well though and had Andie and Terrence agree that they can see other people while she's at the academy. They also promised that her virginity would remain intact, which it did. Fulton Matthews is one of the teachers at the school, and Andie manages to push all of his buttons. With each lesson, feelings start to form that neither wants to accept. Andie is also finding out more about herself than she thought possible. I thought Andie and Fulton suited one another very well but kept wondering how they would make it work while listening. And how Terrence would take the news if/when Andie told him.

This was my first audiobook narrated by Tatiana Sokolov and I thought she did a wonderful job. The characters were easy to distinguish between and their voices were expressive. I will for sure be checking out more of her narrations in the future.