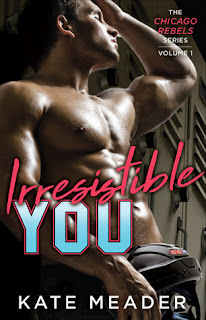 I'm not gonna lie. When Kate Meader's Hot in Chicago series finished, I shed a tear or two. So when I spotted this title in my email, I had to read it. After pushing through a slightly slow start, Ms. Meader's trademark snark and scorching heat snared me and I couldn't put the book down.

Irresistible You follows Harper, a woman who has spent her life trying to make a name for herself in the world of ice hockey team management. Making her team-owner father proud had been a prime goal...until he died and made it his last wish to screw her over.  Harper must share the team she's bled for with two newly discovered half-sisters. Success has never been more important and this time it's for her and only her. An arrogant, stupidly hot Cajun named Remy stands in Harper's way. Problem is, she needs him to save her team. More importantly, she can't get mixed up with a player. But fighting the instant attraction to him may be harder than making her deceased father's failing team a success.

Remy has mere months left before he intends to retire from hockey forever. All he wants is to win the championship and clear the "Jinx" curse everyone believes he carries. But his best chance is stolen when he's traded to a failing team. Brokering a deal with the ice-queen co-owner may get him what he wants. Avoiding temptation is another story. Maybe just maybe he'll get more than a championship out of the experience.

If you like your heroes sweet as pie, able to cook a mean one, and steam up the sheets and your heroines understandably frosty, grab this fun read. With secondary characters who all have developed personalities and intriguing storylines, Chicago Rebels is a satisfying next series after Hot in Chicago.