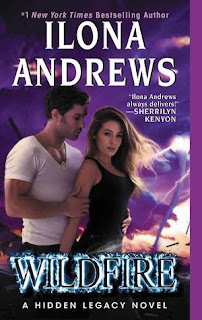 Wildfire is book three and the final novel in the Hidden Legacy series. I've heard rumors there will be another book in the series, so let's hope that's right! I cannot pass up an Ilona Andrews book, so of course, I grabbed this one as fast as I could. This series revolves around Nevada Baylor and her family that run a detective agency in a magic filled version of Houston, TX. If you're a fan of Urban Fantasy + Romance and haven't picked up this series yet you need to. These books do need to be read in order, so no skipping around.

Nevada Baylor takes on a case to find a missing husband. The catch is that Rynda Sherwood, the wife, happens to be the ex-fiancee of Connor "Mad" Rogan. With Rogan and Nevada having feelings for one another I knew we'd wind up with some jealousy and boundary issues and boy was I right. Add in that she is dealing with what comes from trying to be acknowledged as a Prime (strongest of magic users) and having someone out to get her at any cost and you have one heck of a read. We get to see some back story on Nevada's growing powers as well as how she and her sisters have such different magic abilities too which is just icing on the cake.

Wildfire is a great conclusion to a series I'm so sad to see end. This installment really cleared up a lot of questions but I'm going to hold out hope that one day we'll get a follow-up or spin off of some sort. IAndrews is such an awesome writing duo (it's a husband and wife team) that they've quickly become one of my favorite authors. Their world building is so strong and I love the character development and romance aspect in their books. If you haven't tried this series yet and love Urban Fantasy full of magic and action you'll love these.