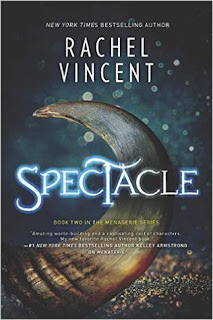 Spectacle is book two in the Menagerie series. I've been a fan of RVincent's for awhile now and try my best to read each of her books no matter what genre she writes, because her writing is just that good. This series is a mix of a dark Urban Fantasy with New Adult. While it isn't for everyone, if you're a fan of darker type reads you might get as addicted to this series as I have.

In the previous book, our leading lady Delilah managed to free the cryptid's from their cages and overtake the menagerie. They're now touring the towns acting like nothing has changed, and everyone is thriving in this newfound freedom. It doesn't last long though before everyone is caught and taken to the Savage Spectacle. This isn't anything like the menagerie they were in where they were beaten, starved and thrown in cages. They're now living in a dormitory, have access to healthy foods and showers. While it seems a lot better on the surface, they're now facing new challenges when they're placed in electroshock collars that are able to control not only where they go, but also what they do and say. The Savage Spectacle runs on a different set of rules, one where anything goes for their clientele as long as they pay. This ranges from the cryptid's serving drinks at parties, to fighting in a ring gladiator style, to being hunted for sport. Delilah and her crew from the menagerie know they must break out, but their outlook is bleak with most of their abilities removed.

Spectacle is an addicting dark fantasy that I couldn't put down. My emotions were all over the place while reading this installment. The book is dark, and that will give some readers issues. But it's told so well, you're hoping that Delilah and the others stay strong and manage to escape somehow. It leaves off where I want the next book asap and I already know it will be a must buy. If you're a fan of darker reads I cannot recommend this series enough.