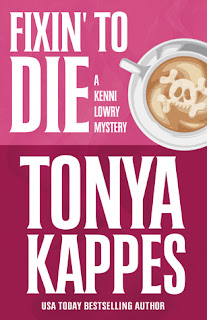 Fixin' To Die is book one in the Kenni Lowry series. It's been forever since I've read a mystery and when I saw this one had a ghost in it I knew I had to try it out. I wound up loving this book and cannot wait to read the next installment.

Kenni Lowry is the sheriff of Cottonwood, KY, a small town that has had zero crime since she's been appointed sheriff. That all changes when the town's doctor is murdered and the local jewelry shop is robbed on the same day. Kenni is determined to prove herself by solving both cases and though she thinks she's going a bit nuts, she has her Poppa's (grandfather) ghost there to help along her investigations. Since he passed, her Poppa, the former sheriff has been the reason for the zero crime rate in Cottonwood. He's been scaring off the criminals or righting their crimes before anything could happen. I was happy to see Kenni trying to solve the cases, though she did come to a few quick conclusions that didn't necessarily pan out.

Fixin' To Die was such a fun mystery! I loved that there was a ghost in the mix, and that he didn't make everything easy for Kenni. There was a dash of possible romance mixed in which has me wanting the next book to see if it grows. The mystery bits were well done, I wasn't able to figure out who the killer was but it made sense once everything was revealed. All in all, this was an excellent start to a mystery series and I'll be grabbing book two quickly. If you're a fan of mystery books and haven't tried this series you should grab this one!

This is my first audiobook narrated by Hillary Huber and I found it quite enjoyable! She brought a lot of personality to each character and I thought it suited them well. I'm hoping she narrates the second book in this series since I enjoyed this one so much.