Review: When Beauty Tamed the Beast by Eloisa James 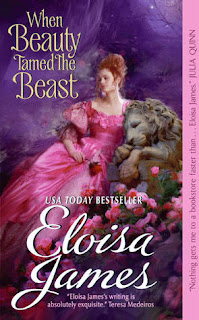 When Beauty Tamed the Beast is book two in the Fairy Tales series. I have a weakness for a fairy tale retelling and couldn't pass this one up. This story if you couldn't tell is a loose retelling of Beauty and the Beast. The other books in this series are about other fairy tales, the previous book is Cinderella and the next one is The Princess and the Pea. EJames really makes the story her own but stays true to some of the characteristics from the fairy tale which I appreciate.

Linnet Thrynne is a beauty but ruins her reputation when she goes to a ball and wears a dress that makes her look like she's pregnant. With rumors swirling about her, her father must think quickly of a way to fix this mess. They find out that Piers Yelverton, Earl of Marchant (aka the Beast) is single and his father is more than happy to pick Linnet as his son's bride. You see, his father wants someone to be able to carry on their family name and with Linnet already "pregnant", his impotent son will be able to claim the baby. The duo meet and quickly butts heads but grow to an understanding and a sort of friendship during the time they're together. Piers is a doctor and very prickly, he fit the role of Beast quite nicely since he has the same attitude. Linnet is used to getting her way with men, she has an allure that most men fall under just by her smile. It was an interesting pairing but one that worked out very well. There was a note from the author at the end of the story that said House, the doctor on the TV show was who she was inspired by when she wrote Piers' character and I can totally see it.

When Beauty Tamed the Beast made me fall in love with a new take on Beauty and the Beast. The characters were engaging though I did want to shake Piers a time or two. I enjoyed seeing his character grow from being an unfeeling jerk. Linnet was a girl after my heart, she wasn't afraid to speak up when she felt something wasn't as it should be. If you're a fan of fairytale retellings and/or historical romance I think you'd enjoy this book!