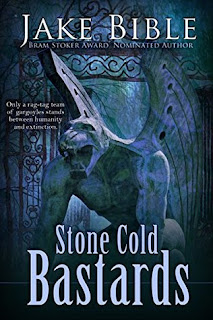 Stone Cold Bastards is a standalone book all about gargoyles trying to save the last remaining humans from the demons. I normally have a hard time with books told in a male POV and narrated by a guy, but this actually worked very well for me! Thanks so much for gifting me a copy, Melissa.

We quickly dive right into the story by meeting some of the grotesques, think gargoyles but don't ever call them that. The first bit of the story is told in Mordecai aka Morty's POV and we learn that the grotesques and the few remaining humans that aren't possessed are holed up in a cathedral. They're hiding from the demons that possessed humans who plan on taking over the world. With more and more sanctuaries falling under the demons sieges, theirs winds up being the last one standing. While the first half of the book is us learning about the day to day lives in the sanctuary, the last half is full of action. The demons want to take over and plan on taking down their cathedral by force. With the battle brewing, the humans and grotesques have to try their hardest to beat the hordes of demons any way they can.

Stone Cold Bastards is a unique read that had me rooting for the underdogs. The characters were engaging and while they could be a bit crass it suited their situation well. The world reminded me a bit of The Walking Dead as I was listening, though the demons are able to talk, fire a gun, etc. While the story does cycle through several different POVs it was easy to distinguish what was going on and who was narrating at any given time. All in all, this was a really good read that I'd recommend if you like edgy, end of the world type reads.