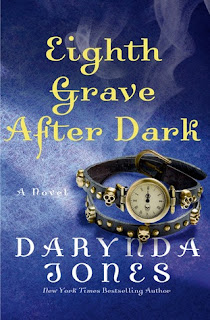 Eighth Grave After Dark is book eight in the Charley Davidson series. I've really been enjoying binge listening to this series. I'm on the waitlist for the next few via my library so expect reviews for those in the coming months. As always, this series is full of humor with paranormal bits intertwined. It is set in one location so Charley isn't running around a ton like usual but there was still quite a bit going on.

In this installment, Charley and the gang are holed up at a convent in hopes that the hellhounds (the twelve) cannot enter the hallowed grounds. The reason they're having to stay there for months on end is because we found out Charley is pregnant and her daughter is the only thing that will take down Satan. Everyone is going a bit stir crazy staying there but they'd much rather not get ripped to shreds if they step foot off the property. Charley's friends and family visit every chance they get and Cookie even has her wedding there. We don't have too much action in this installment but being in a set location doesn't stop Charley from solving a cold case. While this book did feel like a bit of a filler book, enough happened to set up the next few installments of Charley's journey.

Eighth Grave After Dark had more progression in the overall story arc than I expected. While this wasn't my favorite installment in the series to date, it was an interesting one. We're seeing Reyes trying his best to protect his family at all costs, even if it takes a huge toll on himself. We learn more about the twelve and about Reyes's father. There were even several unexpected scenes that I really didn't see coming near the end. All in all, this was a pretty good addition to the series and I cannot wait to see what happens next. If you're a fan of Urban Fantasy full of ghosts and mystery and humor you'll love this series.