Review: Sixth Grave on the Edge by Darynda Jones 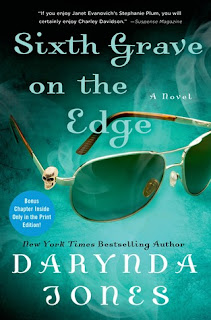 Sixth Grave on the Edge is book six in the Charley Davidson series. This series revolves around Charley Davidson, a PI that is also a grim reaper. She helps out the local police department solve cases as well as help ghosts cross over to the other side. With tons of humor mixed in, this series is a must read.

We start off with Charley Davidson helping out an FBI friend that has a cold case she wants her to look into. The cold case is none other than Reyes Farrow being abducted in his childhood, though the FBI doesn't know that. With Reyes not willing to spill the details Charley investigates to glean more information on her man. There's no rest for Charley in this novel, though, she wakes up one night to find two men that broke into her apartment only to tell her she has 48 hours to find someone in hiding or they'll hurt Charley's friend. Not knowing which friend they're threatening, Charley goes into action and tries her best to figure out who is behind the threat as well as find out why they want her to find this person. Lastly, we also have Charley trying to help someone get their soul back that they lost in a card game. This installment gives us a little more background on key characters as well as introducing a few new ones that will more than likely come into play in the next few books.

Sixth Grave on the Edge is full of whodunit and I couldn't put it down. I had to know more about Reyes's past as well as the card dealer that took a man's soul. This opened a few doors for the next few novels that I'll be interested in seeing where it goes. Charley as always throws herself into all the situations without really worrying about the danger or repercussions. I was a bit worried about our leading lady in a few scenes and the story really kept my attention. All in all, if you're a fan of Urban Fantasy and haven't read this series yet you have to try it! I highly recommend the audiobooks since the narrator does a fantastic job.