Review: Blame It on the Duke by Lenora Bell 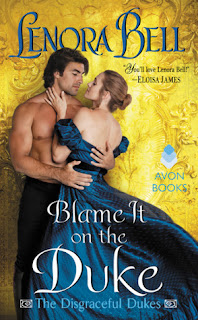 Blame It on the Duke is book three in The Disgraceful Dukes series. I've really enjoyed both of the previous books in this series and was excited to get this one! LBell has a unique writing style that grips you from the first page and adds humor in just the right places. She's quickly becoming one of my favorite Historical Romance authors.

Rather unconventional, we start off with Nicolas, Lord Hatherly finding out his father lost while gambling and promised his son's hand in marriage to the winner's daughter. I can't say I've heard a Historical Romance start out that way before, but it had me quickly intrigued on where the story would go. Nicolas decides to dissuade his bride to be but winds up going along with it once he meets her. Theirs will be a marriage of convenience once all things are worked out. You see, Alice wants to go to India, she's been working on translating part of a book and wants to submit it. She cannot do so unless she's a married woman so she's game for their charade. Nicolas on the other hand wants to remain where he is and have enough money to take care of his ill father. It's a win win situation, but they didn't count on feelings growing during their marriage of convenience.

Blame It on the Duke was a bit bittersweet to read since it's the last book in the series, yet it was such a great read. I'll just hold out hope that the series is extended in the future. The characters were refreshing and I enjoyed seeing what would happen next. I really enjoyed Alice's character, she is so unique. Nicolas was a good match for her, even though I wanted to shake them both on occasion and tell them to just admit their feelings. Another thing I enjoyed as a reader is that these books can be read as a standalone. While each leading lady has made an appearance in a previous book, you can get away with reading these out of order or choosing one that you think you'll like best. If you're a fan of Historical Romance with a healthy dose of humor mixed in you'll adore this series as much as I did. I highly recommend it.